YYesterday seemed like Sunday to me. Imagine feeling that the week was over and already another work week is among us. Last night I watched Superman Returns. It's rare for me to watch one of the old ragged DVDs from work to see if it's still working. I don't do that for any movie that somebody may complain skips, but this one has Parker Posey in the cast. Her role in this film is about as small as her role in You've got mail, and the film is about as exciting too. If you think of the it in terms of whether this movie being hexed, then perhaps it gets more exciting. I probably haven't mentioned yet the way the libraries in the city of LA stocked up in multi copies of the DVD Towering inferno last year. Why? You're guess is as good as mine. I didn't even know the movie industry had converted it into DVD format. The willingness to play Superman is right up there with independent contractors seemingly striking it rich with new clients in Iraq or Afghanistan.

Somebody tell me why there's two entries on IMDB for this film? http://www.imdb.com/title/tt0772202/
http://www.imdb.com/title/tt0348150/
I was going to try to review this film, but the only thing I found interesting was the smoking and the run away car rampage that manages to hit nobody. The smoking because this film is PG13 and it seems obvious to me that the director was trying to sneak the cigarettes in so that the MPAA wouldn't rate the film R. The cigar scene seemed empathetic to this as it only functioned to cause a gas explosion. When I think of cigars, I think of mediums and gypsies trying to make contact with the spiritual world, as well as VIPs who assume the role of bossman whether it's for the mafia or a corporate conglomerate. 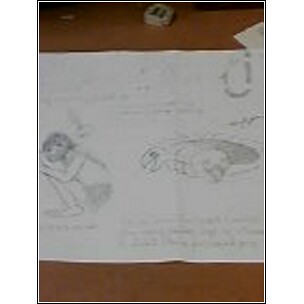 To rid myself of the guilt of watching TV and not reading, writing, drawing, playing, cleaning, I said to myself, it's too noisy to concentrate. Looking at the fireworks outside, I could think of at least one person I would've liked to be with at the time. It's about 11:00 when I put together the package that will contain my iPod for shipping tomorrow. I also read one of the editorial letters in the opinion section of the Times because it was on immigration, and I remember a news segment on the topic of minutemen patrolling the border in which AG covers the NBC report, and the editorial happens to be by somebody called Dana Garcia. I would've liked to have read the article she/he is editorializing, but instead, I find myself daydreaming again about buying a personal ad space in the classifieds saying something like "It's me. Is it really you? I miss you soo much. I need you". I snap out of that long enough to write a fan letter. I mailed it this morning together with the iPod.