baby to become a published author in 22

did I mention that I've been writing myself into the plot of Black Houseas I read. It's really the only way I can force myself to stay focused and interested in the book's slow start. I guess this is what ADHD feels like. But today I tried again (searching for media on Joan Carrie Bowler.) I'm pretty much just sitting on the book Master of Ceremony-- a flashback of my youth when my father would hoist me up on a high chair, but it not being high enough, he would place container boxer of seltzer water on the chair so as to discourage me from jumping off and running away at the first detection that my haircut was either taking too long or not going well -- but when I get restless and sleepy from reading Black House, I skim these MCpages. That's where Jo Wilder's real name popped out at me. A lot of good that's doing me though. I pre-ordered Baby's book. I'm hoping to see juicy answers to unexplained questions. Like maybe she had broken Matthew brodereck's leg herself because she caught him cheating or something. I simply feel that the photos out there around the time of the auto accident, where Matthew is using crutches, show Jennifer unscathed. One would think that, if it was her neck that she got surgery on years later as a result of (evil Otto), she would have at least been wearing a neck brace. Time travel is not easy to write about. That is my excuse for the ADHD behavior. Jennifers family tree includes the name Epstein. But I'm more interested in the black and white photo of the little girl with the big nose . I never could find original footage that showed the Johnny Ray's airport arrival footage which includes fan poised on fence wearing fancy "Johnny Ray" shoes. I'm veering toward a reincarnation explanation for time travel because believability is my main concern. Years from now when scientists figure out how to reverse engineer the UFO spaceships which have crashed landed on earth, and flight travel industry will have struck a deal to revamp and design better airplanes. I'm sure the vintage jumbo jets will appear quite primitive then. So, for now time travel will remain as something people do who believe in reincarnation as they will have the wherewithal to trace their previous lives. Believable, yes? 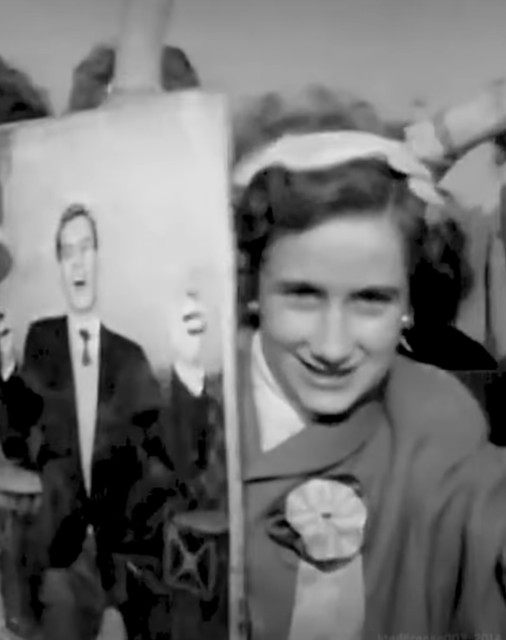