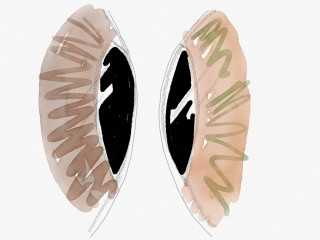 sidewinding eyeballs as a whole

This is the thing about my blog set–up. A few days back I posted six times because I was texting test messages, from my phone, from the SMS Messages app, because I knew that I could update that way. I had already tested the way emails react with the lj servers when pictures are attached. They're saved in my Unsorted album. And as it turns out, that's the same folder where the eyeball doodle above is stashed, which stands to reason because the protocol that I used on Telegram was the Gmail bot.

One of the things that was puzzling me about SMS texting image attachments was this line of text Sent from my mobile. "________________________________________" that appears in red before the lj-cut that hides the graphic. Where does it come from and how can I customize it to stop? Well, I couldn't figure that out just yet. I think if I can figure out how telegram bots work, I might be able to come up with a way that's as easy as SMS updates to lj, but utilizing the Gmail bot in Telegram to do so.

Now I'm not saying it's going to be easy. I'm saying it'll be worth the effort because, as it is, I don't even understand how to manipulate Mime formatting when I send my blog updates via eMail. Plus, the fact that I might gain some knowledge in the mysteries behind XMPP and other server references like PHP, etc. I may be making strides in my goal to learn XML.