Outlines aren't the same for screenwriters. Just found out, thanks to "Logline" app

dialect as part of culture ticks 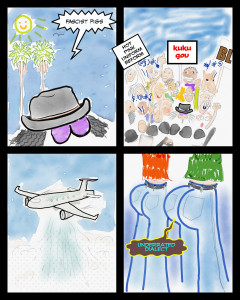 There's a hamburger patty thawing on the kitchen counter.  Doesn't look like my suggestion to lj has made the cut (so far.)   Sigh.

The Apple TV device came in yesterday.  I spent some time downloading News apps because it's the one thing people don't think about, but they don't get for free when relying on streaming TV instead of cable TV.

Previous to the device I ordered, I had already downloaded the Apple TV app to my smart TV, but the app wasn't having anything to do with HBO MAX.  In the meantime, while I was just pushing buttons like a dweeb, I had already signed up for HBO MAX on my phone; downloading the iOS app and everything.  I figured, if I wasn't gonna be able to watch Flight attendant on the TV, I would simply watch it on my phone/laptop.  Then something happened.

When I screen films, I like to think that some of my ideas for my own screenplay are making their way into movies I don't know about because I just can't focus long enough to complete a 90 page screenplay without sharing my scenes as I write them, publicly, here on livejournal.  And the HBO MAX original series has a link or two that I could use in the plot of my story.  I forgot what it was about FA that I wanted to use, and rewatching episode 3 didn't help.

For what it's worth, as you may see crazy little brainstorming ideas in the "outline" I'm sharing below, but the date July 11, 1991 is a date of significance that I will be using in the story.  I got that date from UFO conspiracy sights that reported strange sightings in Mexico during an eclipse which occurred at 1:23PM.  1:23, another significant number, which has archaic meanings in itself as well as an airplane from Japan that crashed.  But did you know an DC-8 from Nigeria crashed on July 11, 1991?  Flight 2120, I thought might be significant since everybody is pretty much ecstatic that 2020 is done and over with and a new prez will take the helm, etc.

I tried to get more info on flight 2120.  Curiosity had me trying to figure out what time of day it was when the plane crashed.  It's pretty grim research, I know, but I could not find anything on it.  Most newspaper clippings just mention 'minutes before take-off, the plane crashed.'  Here's where time travel comes in to scrutiny.  I know it isn't a big deal in comparison with the lives that were lost that day, but I kept reading the same narrative website after website that contained information on flight 2120 and they all seemed to regurgitate the same info.

What seems to be certain is that flight 2120 crashed in the morning and there is a 9 hour difference between the location where flight 2120 crashed and where the eclipse in Mexico was taking place.  1:23PM in Mexico would be 10:23pm in Saudi Arabia, and 10:23AM in Saudi Arabia would be 1:23AM in Mexico.  If one considers that the eclipse in Mexico blocked out the sun (as if it was the middle of the night), is it possible that the DC-8 indeed crashed at 10:23 carrying the explosion as tiny specks in the sky during the noon-time eclipse somehow someway?

That's all I got right now.  Until I finish this sequence I'm working on, safe travels.