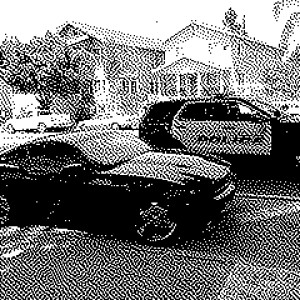 I finally cracked my iphone screen.  It isn't obvious and to see it, one has to hold it just right against the light.  However, I'm sure it'll be noticable when it's time to upgrade and trade it in for a new iPhone.  So I've decided to start carrying around my Android phone, which theoretically has durability beyond the simple iPhone.  Don't get me wrong, my Sonim XP8800 sucks ballz in comparison, but for now the smart thing to do is to baby the iphone so that it lasts until December when I'll be eligible to upgrade, free from the contract lease.

The inconvenience is in the contacts, the social media apps passwords that I don't have memorized, apple pay, sluggishness with browsers and apps, etc.  The important thing for now is that I've managed to get a feel for the camera apps I have installed to reduce memory space for each photo I take with my itchy trigger finger.

I'll miss the pixelating effect I get from BitCam, but BlackCam will save me roughly the same amount of memory.

I am nervous about using the Sonim XP8800 for cop-spot photographs as this phone is black, thick and possible eligible for being mistaken for a gun.  WTF.  When I had my 'pink' iphone for taking pictures, I had no worries that a nervous policeman might think I'm aiming to shoot him with a 45 (or something.)  I'll miss the music too as it's been my experience that there is no comparison when using an iphone to listen to tunes compared to an Android.

I won't be focusing the remainder of the year searching the play store for adequate replacement apps for all the things I do on the iPh.  As soon as January comes around, I'll be seeking an upgrade.  I won't upgrade the Sonim when it's eligible because it works fine with the Zello app I'm constantly playing with, and the speakers on it are far better than the iPh.  My Sonim works great in the shower while I listen to the RadioGarden app tuned to KGO.  Honestly, cracking the iPh screen is really the only way I ever would've decided to carry around the Sonim device as my primary phone.  It's just too bulking and heavy.  Next time I fall on my ass skating with the rollerblades, we'll see how this new phone holds up if it's in my back pocket when I fall.