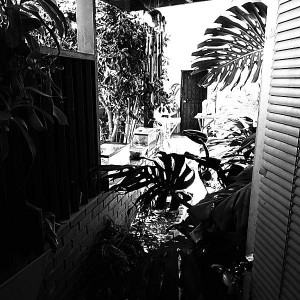 Out of all the apps I downloaded on my Android, in search for a BitCam equivalent, BlackCam seems to be the closest in comparison to them all. I like the special effects, vignettes, vintage flaws and spec and light leaks but all that stuff uses up memory. And me being the suspicious type, I cannot fully grasp how and why more memory would be used to create those effects when a cheap vintage camera can do it for half the amount of memory after the photo is scanned into the computer. What I don't like, and immediated deleted the app for, is when an add pops up an app after each photo, or limits the amount of pictures one can take per day.

Sometimes an app would simply crash on start-up. Those would get deleted too. Unfortunately, I couldn't find any camera apps that duplicate the black and white effect quite the way Bitcam does with it's screened effect giving the photos a pixelated look. And I'm using the term in an 80's sense, when printers used screened prints, or illustrators were asked to create a realistic picture using stippling.

All of these black and white photos I'm taking are mainly for my own reference for subjects to draw and paint. Although there was a time that I wanted to be a painter/artist, I never agreed with the idea of sitting in a park with an isle a stool and a small table of watercolors to paint on site. Perhaps it might be more appealing to me when I retire. Los Angeles has many landmarks to just people watch while I slowly paint a picture of the horizon. 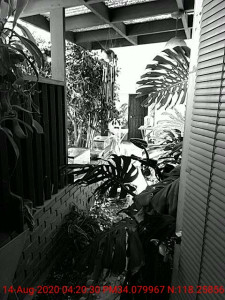 I guess the reason I can easily disregard the special effects the other apps offer is because I try to capture images the same way a gunslingers tries to shoot his enemy dead in the middle of the street during a gun fight. Fast. I need an app to start-up easily and quickly. I don't need adds to close before the app starts. These days, I keep my camera in my hand when I'm anywhere in town. Mostly, I've decided whenever I see a cop, this would make for good practice to get the camera and use an exposure. I've heard that the police these days hang their heads to avoid eye contact with others, which is a complete change from the old days when making eye contact with a law enforcement officer made a person recoil. Since it's highly unlikely I'd ever capture an exposure of a cop abusing his power, especially since my camera will default to black & white, low resolution exposures, I look forward to one day getting a clear full portait picture of a cops face cowering away from recognition. Perhaps if I get one of those, with the right composition, the right shadows, etc. I will be able to sell it to Time magazine.

Here is where the dilemma over which app to use, the built-in Andoid Camera or BlackCam. I can rely on the built-in camera to boot up directly. No adds, no special settins that need to be made, and post-picture processes needed to get the image to the SD card. So far, BlackCam functions the same way when booted up. It's already set for a black & white exposure and it's configured to save my picture to the SD card. The volume button has also been configured to function as the exposure button. The only difference between the two apps is this: BlackCam doesn't log GPS data, the built-in camera does.

I don't be deleting the InstaMini camera app because I like the borders it creates. It's exactly what I am looking for for the blog, something that gives the illustion that a polaroid photo was attached to a cumpled piece of paper.
Tags: photos
Subscribe