Everytime I see him on TV 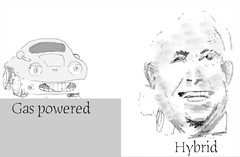 I have this image in my head of Sen. John McCain talking about Chevron gasoline. I found a motivational book that works great for projecting my illustrations using PhotoShop. The name of the books is Illustrations with PhotoShop: a designer's notebook and, although some of the finished touch ups are done with a PC, the version used vary from chapter to chapter. 771.28018 A239Il is a dewey decimal number that might make it easier to obtain.

Last night I was brainstorming some captions for a possible rendition of the public figure and the Chevron animorphic cars. I only came up with Greasers do it with brains which I could only visualize with McCain standing next somebody hot, and Sticks are made of plastic in hybrids automobiles. Actually, I don't think there is a line of hybrid car that can be classified as manual transmission. You know, this frame of mind I had was probably attributed to the film Crash. And before that, I sat thru something called Holy Mary. I don't recommend that one. I almost dozed off trying to follow the story by reading the captions as fast as possible. Those French talk fast. Anyway, I want to see that one again, sadly enough, because it's the only film I can think of which depicts the guy willingly going into a sexless marriage.