u r the quarry 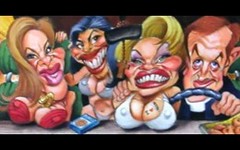 This title was definitely not one of the songs which motivated me to download the music. In fact, when the disc had gotten itself stuck inside my laptop, the only thing I could think of was what it would cost me to have the disc (with the songs like ALL THE LAZY DYKES) removed by a technician. As much as this little entry is going to hurt the optimistic dreamer in me, I'm not holding it back. The way I look at it is I don't mind being called a virgin by a homosexual, and I'm okay with remaining a virgin as far as homosexuals are concerned.

Once upon a time, my gf took me on a double date. Come to think of it, we've had a lot of those throughout our affair, but what really stays embedded in my brain was when her cousin(s) were nice enough to let us doze in her car while they danced the night away. My gf and I steamed up the windows to that car to the point of appearing like smoked glass in a bathroom with tears rolling down. We kissed, petted, and did things that has yet to be filmed in an R rated movie. After rolling my tongue over her areola, we decided to take our necking into the back seat and she said "Take your shirt off". I would've been more willing to comply back then, when I didn't have the hairy nipples I now have, but thought it odd that this might lead to getting my nipples sucked which wouldn't do anything for me sexually like the fully clothed dry humping we usually spent our time doing together. What I meant by hurting my libido is, if I ever thought there might be any remote chance that I could convince my ex to take me back, if she ever caught a glimmer of this blog entry, I think it would be safe to assume I blew it.

That's just the kinda guy I am. I don't care about the ineptitude of sex that became a hindrance back when I was a teenager, I simply compare myself to some of the abnormal things that other over-sexed people do which might be deemed degrading. That's pretty much the highlight of my affair with my high school sweetheart. Damn! The more I try to make sense of what this Morrissey CD may be about, the more I feel like I'm being set up for a disaster. I have to wonder, now, whether or not the cousins who kindly gave us a ride to the dance club were gay or not. I don't know about homophobia, but when I think about it, it seems to me that dykes would have more in common with me than gay dudes.

I remember my xgf being sneaky about something that she held in her hand. It was a photograph that she was undecided to show me because she was wearing only a top and her panties. Red, I think. Her reluctance of presenting me with this piece of memorabilia was that fact that her boobs were slightly revealed as she had been standing on her bed while bent over forward as she held herself up with her arms. The white t-shirt she had on was large with a loose fit, so as I had the perfect view of her derrière, the t dangled revealing her breasts which she scribbled out with a blue ball point pen. Double damn!!

I don't remember if this was a polaroid, but when I asked her who it was that took that picture of her, she named one of her bf, Silvia. Because my ex and I were very sensual when we were together, I never thought of suspecting she might be gay or bi. The way I still feel about her, though, I don't think this would make much difference to me if she showed up again.

I was never a gay basher, though I recall some of the guys I hung with didn't feel the same (in high school). My friends were bigger users so they may have had a vices to support, and I'm not one to judge how and where they got their fix. If I dropped by The Palms for a drink, I wonder if I would get my ass kicked by a bunch of buch women. It seems that it doesn't matter how popular a club might be, if I go to a best kept secret where swarms of straight, horny women gather, I'm not going to find somebody for myself if she doesn't appeal to me; and the only women who appeal to me are women who remind me of my xgf.

All The Lazy Dykes