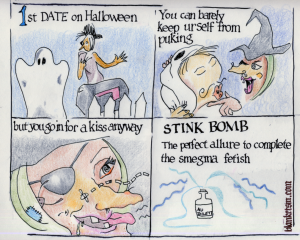 On his left hand, between the first two knuckles — otherwise known as the space between the middle finger knuckle and the index finger knuckle — a tiny eczema-like blemmish from years of scratching the same area year after year. The scar tissue, slightly calloused, seemingly like early Plaque psoriasis, but probably just dermatitis scar tissue from irritation brings back memories when his skin was smooth. Even then, when the itching began, Bierde felt it was caused by subconsciously masking the pain of pounding one's fist against something (mainly a jaw.)

I don't mean to say that eczema or dermatitis is contracted this way, but Bierde recalls his anger management flaws from twenty or so years ago when most people who made him angry produced a desire to physically altercate the issue with violence; the adrenalin from the raised blood pressure possibly causing a chemical reaction to compensate for the pain one might receive in their fists after punching somebody's lights out. Of course, short of punching somebody, missing their jaw, and catching their tooth on a knuckle, the dermatitis affected area is according to Bierde a direct result of feeling tickling sensation in his fist which prompted him to think of whom it could be in his immediate circle of associates that may have angered him so much so that his fist itches.

Meanwhile, Bierde hates knowing what he did to Elle, alienating her in stages: first the anger resulting in silence. Ex-communicado. No Happy Birthdays, Merry x-mas', Easter, four-twenty, etc. Over the years, this turns into desimation of love. It's Bierde's idea that he would marry Elle one day which stubbornly caused him to reformulate his understanding of what love was by definition; a distorted, homophobic, aggressive perspective.