POV and pretty, flowery decor for dragonflies hungry for blood 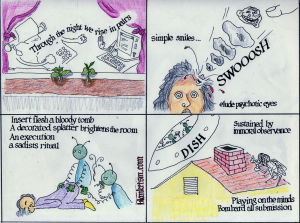 My typewriter is in the shop. It's coming close to a month being there. I don't know if it's too soon to check if it's ready to be picked up. I haven't heard from the shop, but I would rather wait for their call when they're ready to notify me that the machine is fixed. In the meantime, I invested in various different screenwriting software. Some apps are for my phone, some are for the laptop. PowerStructure was major disappointment if only because of their statute of limitations on how often the software can be installed on your computer (each time it crashes and needs to be restored.) Untitled is an app I'm using for my iPhone. Celtx is an app I'm using for my laptop. There's something called Scrap which is an app on my phone that focuses on using storyboards for building a screenplay. None of these compare with my manual typewriter, but I discovered the brainchild of using my cartooning ability to use storyboards to compose my scripts from the Scrap app.

This new thing I'm doing is time consuming. I first pencil the composition on paper, then ink the captions with ink first, before I ink the illustration. I use color pencils if I'm using 20ish pound paper because my watercolor set wrinkles thin sketch pad paper. After all that, I scan my storyboard. If I upload the image to lj using the New Post Editor, the image file is automatically stored into a default folder (in livejournal) AND the Editor doesn't allow me to select what size I want to add the image onto a new post. The old editor allows this. They each have their perks, but it's difficult to remember which one is good for what task.

I know my cartoons suck. At least the recent cartoons I've illustrated seem to be blasé. Something occurred to me, since the story I'm writing about was inspired by my high school days. During that time, Central America was war torn in a revolutionary dispute. In the span of time that this war was taking place, which I feel needs to be emphasized somehow in the story, the band SLAYER came out with a few interesting songs. Interesting because Jeff Hanneman wrote them, or took part in the writing process with one of the other band members. I decided I would scrutinize lyrics and song melodies of only those songs released within the time span of the war and were written by the duo, Jeff and Tom. I left King out only because I want to see what effect my plot would take if I correlate song topic, even if it's only one or two lines of lyrics that have personal meaning to me, with the relationship of the star crossed lovers the plot is supposed to revolve around. Since I got the impression that King was difficult to work with and speak to when Araya addressed their fan's inquiries over the future of SLAYER, I concluded that the songs written by marauding duo instead of conflicting personalities might deliver a different twist from that which might result with Kerry King songs.