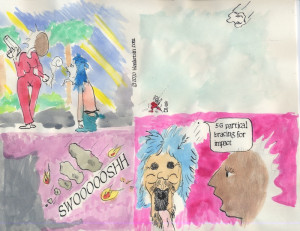 What is a ticking clock? Right off the bat, the first thing I think of, is suspense. For instance, right now I'm watching the new The Invisible Man and this action thriller has many ticking clocks. Some are short, others last longer. Without giving too much away from this movie, the first five minutes gets your blood pumping as a woman mysteriously tries to escape her relationship by sneaking away while her husband/boyfriend (INVISIBLE MAN) sleeps.

So many things go wrong that makes your heart race. Any little sound, big sound, unforeseen detail that may have foiled her escape. Yet the ticking clock doesn't end until the escape is successful (and we jump to a new scene/sequence.)

Currently, my situation with self-quarentine is hardly noticeable. I've stopped going out to theaters for newly released films for some time now — not just since the quarantine. Here is what puzzles me: — I wish I could remember this characteristic I have so that I could run it by my psychotherapist — there are scenes in The Invisible Man that are just plain creepy. But when I see them, they make me laugh here in the comfort of my home where nobody can see or hear me. But if I was inside a theatre house screening the same film, you wouldn't catch me blurting out the outbursts I make at home. Why doctor? Am I shy? This shit's funny. Three good creepy scenes make me lol.

Anyway, it's a good movie. A keeper if I could help it, but on-demand has me renting it for $20 which I would normally be okay with if it was a keeper and I was owning it. Of course, in time the price will go down, but is this what the movie industry came up with when all the theatre houses had to close down and all new releases started going straight to video? Or just inflation. I miss the days when premiers released while the movie was still in theaters only cost $15. To OWN!

So I drew a cartoon. I've had all this free time and all I can do is channel surf what's available for free because all the current rentals are just not interesting enough for me to buy. I can't tune the darn TV out long enough to read my boring book about Nazi hunters, which is non-fiction I might add. The other day, to distract me from the TV, I found myself glued to my phone app for asteroid near Earth Object (NEO) alerts, and I was hypnotized by 2020GH which got as close to Earth as 1/3 the distance it is from the moon. I was fascinated with the countdown speed at which this app displays the closing distance in kilometers (in real time?), but when it reaches the apex, before it's distance starts increasing, the countdown slows considerably.

Last time I was hypnotized like that by a possible meteor was in 2015 when I witnessed a sort of fireball during the August meteor showers from Draco constellation. Anyway, I had gone to the local observatory when that happened and asked one of the staff about meteors. He told me that most meteors, by the time they penetrate the atmosphere, start diminishing to the size of a grain of sand. Even so, at the velocity in which a grain of sand sized meteor enters the atmosphere, it must make a considerable impact. And sometimes I wonder if aliens had the ability to hurl microscopic size meteors into Earth at such great velocities as hundreds of thousands of kilometers per hour, undetectable by the human eye, can they create such natural phenomenon as a volcanic eruption if for instance they aimed their grain of sand into a volcanic hotspot? What would the impact of something like that cause if it plowed itself into my head? i wonder.