How could anybody possibly know how I feel? 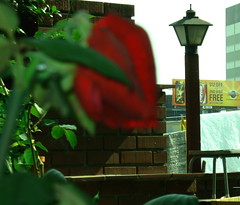 Recapping my ludicrous perspective, the nature of my desire for whom I cannot have, in vain, with disregard to others as well as myself, I gather I'm wrong but hold strong to the belief that YOU ARE THE QUARRY is AOR about one guy reminiscing of the good times he had with a forgotten love. In AMERICA IS NOT THE WORLD, this guy recalls the way his gf transformed him into a guy who dips his french fries into a blob of ketchup one at a time instead of smearing ketchup over the lot of them, and, the disgust she must have had seeing that same guy didn't clean the mouth piece of his can of coke before opening it and drinking from it. IRISH BLOOD, ENGLISH HEART is the part in his life when they break-up. After she had tried to overlook his unfaithful behavior once, the second time made it final. In their relation, he wasn't able to come out and say, when am I gonna get some tail? That kind of thing was sacred to him at that age. After a considerable time goes by, he sees there's nobody else who can make him forget her. I HAVE FORGIVEN JESUS is about asking god to send him a woman. The result is disastrous. He wants her back and attempts to convince her to take him back in COME BACK TO CAMDEN. Unsuccessful, he regrets having asked god for some booty in I'M NOT SORRY, though he is mindful that he isn't sorry for doing such an uncaring deed in hurting her the way he did. The relationship between the two seemed to be one-sided and too good to be true as far as he knew.

THE WORLD IS FULL OF CRASHING BORES brings us to present when this poor, lonely guy sees the world as a cluster of crashing bores because reality would drive him to suicide. I mean, to think that he's stored all these emotions for one single girl. Take this a step further. Imagine that she works in SAG where she gets jobs to act in major films, but she changes her name, and this guy isn't fooled. He sees her picture and becomes starstruck. He gets her contact information and attempts to hire her in the independent film script he's writing, but of course, it's up to her to decide to accept the job. Meanwhile, the only thing the guy can think about is the flirtatious nature of show biz, the perverse methods of directors, artists, etc. and only contempt fills his eyes for all forms of life. He's still watchful not to be overtaken with jealousy resulting from his vivid imagination.

So, in HOW CAN ANYBODY POSSIBLY KNOW HOW I FEEL, I've been trying to find a metaphor for which having one's face dragged in 15 miles of shit could possibly emulate. It is the feeling one has for another person who doesn't reciprocate those emotions. There's a film from the UK called Dirty filthy love in which one of the characters gets too close to a few sick cows with the runs and suffers a face full of crap sprayed directly from a cow's duff. http://www.imdb.com/title/tt0411291/ Is this what it felt like to learn your bf was cheating on you? As if life couldn't already be bad enough, Morrissey has to portray a loner who doesn't seek respect, approval, sympathy from anyone, unless it's for a quick fuck like the film Closer. I've always been precarious about making friends for the simple reason that, somewhere out there, there was an asshole who plummeted my face with his fist over a girl. I have never been the same since. So anybody who might have the slightest association with him, whether it was a friend of a friend, an acquaintance or word of mouth, I couldn't tolerate any friendship with him/her. A genuine angelino, born and raised in L.A., with all the street smarts and scars that go along with it. One of the songs in this CD contains the words "Los Angeles! you like to rock."

It's hard to imagine this CD came out years ago. I remember hearing Ana say she liked Morrissey (or the Smiths). It's actually been a first time for me. I've never noticed his songs before. Going out of my way to describe what his songs mean to me on a personal level just goes to show you how much I like his CD. Admittedly, I'll confess to considering paying for information on the web to track people down, but I've lost interest as something in the back of my mind tells me this kind of thing is unethical. It's why I discarded my high school year book in the first place. Law enforcement must have the worst time controlling temptation, having access to all kinds of records about people. This song ends on a note of determination. The individual the album revolves around is determined to live out the remainder of his days without a partner to share it with. It almost sounds like the suicide note.

How Could Anybody Possibly Know How I Feel