Don't sweat the OCD until you start swearing 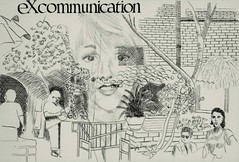 I chose this day off as compensation for having to work Saturday. In a little bit I'll be picking up my very neglected guitar. I find myself scarcely able to feed myself as the test preparation booklet I'm studying is consuming all my time. I completely waste an entire day reviewing algebra text books to make sense of some of the word problems. Rumor has it that the day of the test, all cell phones AND calculators are to be off. So that they don't appear to be sadistic slavedrivers, the conductor of the test distribute scratch paper for computing. At the end of the test, these pieces of scratch paper are collect as well as the scanner sheets. I'm wondering if my test grade would be effected if, on my scratch paper, I were to chicken scratch "Suck my dick, mother fucker" in a not too common script, or whatever other spur of the moment inspiration comes to mind as I rack my brain on word problems.

On Tuesdays, the place where I work is usually filled with children eager to see if anything special is happening there. Tuesdays are reserved for children under 12 years of age, I guess. I happen to love children, though I have little patience for those urchins, and I can't figure out what I could've been thinking to take a day like today off instead of, say, Thursday. Tuesday has a curious ring to it phonetically and I think it sounds a bit like Deuce-day. I decided if I had to choose any day to stay home, Tuesday would be it. It pays off when Monday is a legal holiday and I get the four days, Saturday through Tuesday, off in a row.

Here's a short thought inspired by my world of Tuesdays. It's a slogan for future kitty programs, or maybe it might qualify as a haiku.

I think I've found the film that will take away all the tix sales from An american crime, but I doubt it will be a contender to any kind of award. It is a tripple sequal. The film is Bourne ultimatum. Don't get me wrong, I know this one should be good. The first film in the series was so good, it got mentioned in The 40 year old virgin. The release date on this movie should be August 3, according to Entertainment Weekly. Other films in this week's issue are The invasion, a movie about suspense in the lives of a professional mom with a sick boy whom is believed to be suffering from an epidemic foreign to this earth. If it's true that this film will contain a positive 'happy' ending, I probably won't be impelled to sit thru it in theaters. Instead I just might wait till it runs on HBO. Becoming Jane is the film that should make my summer whole if crime doesn't surface; however, the actress playing the part of Jane Austen is Anne Hathaway. Some of the messages left on msg board forums point out how much more beautiful Anne Hathaway's appearance in the film totally disorients the viewer's attention. Even the title Becoming Jane sounds like it's paying compliment to her good looks. Unlike the makeup job in the film Transamerica, in which the protagonist convincingly portrays a transvestite, I serious doubt whether Anne Hathaway will succeed to portray the inner beauty encompassing a famous poet. I'll admit, when I read that particular entry, I envisioned Emily Dickenson and began to wonder, who's Jane Austen? This film starts August 3. I didn't see anything in Entertainment Weekly magazine about An american crime. Perhaps the lack of mention of a summer 2007 release gives some credibility to the limited release I've been reading about it. It's situations like this that make me happy I live in Los Angeles where the film is sure to open (somewhere).

Another film is Superbad, a comedy about something. That opens August 17. Stardust is scheduled to show on August 10. I believe it is some sort of romantic drama. I don't know what the plot of Brother Solomon, August 31, is just yet. The title of it doesn't appeal to me very much.

I use to wonder what I was going to do when I heard that Roy Orbison passed away. I promised myself I would collect his music. I never got around to doing that, but gees Morrissey sounds a lot like him in his album You are the query. I've been listening to these songs non-stop. I remember doing the same thing for the song The blower's daughter by Damien Rice. I finally got sick of it. There's nothing like the feeling I get when I set aside a CD like Morrissey's and forget about it only to come back to is surprised that I actually have it; then dwell in all the songs all over again.