How to spell a grunt sound with today's alphabet soup 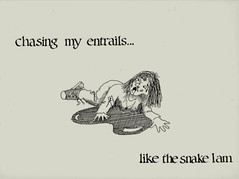 A talk powerhouse is shut down† by MJ §A1, A second financial blow for struggling CBS radio, by MJ §A22†, Global giant Nestle to buy baby food maker Gerber,by AG †, Maker of 'Girls gone wild' video arrested by Federal marshals, by RV §C3‡

Recalling one of the easiest history classes I've never had difficulty in making the grade, Mr. Burn's history class was strange and enjoyable. Every day, when his students would walk in, he had a new "nice" word on the blackboard which everyone in the classroom would be required to write into a notebook. The whole purpose of this exercise was to improve our vocabulary. This was a history class. That one and Mr. Bono's history class seemed uncommonly strange. The exercises in the latter class was going through various chapters of the textbook in search of material to build our own probable test questions. I could write questions & answers the entire length of the class. Today, I was already preparing to draw up a cartoon rendering my take of the gauntlet currently in the news, but I can't seem to conjur up an illustration and write a clever anecdote to accompany the caricature.

How many times have people read books, listened to stuff, and shuck a few words as meaningless or adequately grasped because their full definition wasn't exactly known? I do it when I read books that I don't find interesting enough to keep a dictionary nearby. I've always been terrible at slang, and I embarrass easily when I hear slang words I don't know how to interpret in the way they're used. I looked up the word nappy in urbandictionary.com and became enlightened as to what all the fuss is about. So before I forget, I'm going to list some of the LA Times news stories I'm planning on taking a look at tonight.

I guess what I'm trying to get at is, when is the education system going to educate students on slang? When I started working here (LAcity), I honestly couldn't believe how freely some of the kids would walk into the place using words like "fool" so loosely. I didn't know whether it was a word that Mr. T helped to make mainstream, or whether they heard it in Heaven & hell, a BLACK SABBATH song, but if it was from the lyrics, then I surely would've heard the term more frequently when I was still in school in my teens.