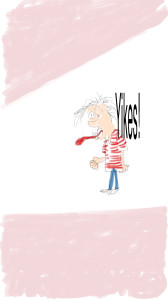 I know I didn't rant about his, but I guess late is better than never. I have a friend cleaning my house while she picks herself up from (I don't know, she never confides in me. I can't even ask to see her drivers license without an argument developing.) I have cleaning supplies, and one of the things I rely on is my mop and bucket, a yellow janitorial version with detachable straining lever. Well, I had to demonstrate how this works because at first the technique she was using was to fill the bucket up with a gallon or two of water. This caused the bucket to tip over because of the lack of weight that a full bucket of water would stabilize to allow the use of the wheels to roll the thing around the floor.

No. She wanted one of those handy dandy mops that could strained by hand, not the bulky strainer mechanism on my janitorial mopping unit. I gave in and bought the stupid mop she claimed she needed. A few days after, I notice this ugly stain on my wallpapered wall and the first thing I thought of was the leak that I'm always encountering in the living room when it pours cats and dogs. An old, broken gas heater is built into the wall where the stain is and I thought it could be a possibility that the water was getting in from the spout leading to the roof that vents the heat from the heating unit. However, when I asked my friend if she knew about it, she honestly admitted that having leaned the mop I bought for her to use against the wall, upside down so that the cleaning portion is making contact with the wall, the wallpaper absorbed the damp mop and now I have a stain.

I remember the landlord specifically advising me to not wet the wall because of the wallpaper when I first moved in and I managed to keep the wall clean of blemishes, save for one ugly ink stain I made years ago. I had managed to hide the ink stain as it was in a corner of the wall where I covered it with a bookshelf. I'm going to try to clean the stain with soap and water, according to DIY videos, but when I discover that it will be a failed attempt, I'm seriously considering re-wallpapering that room; something I should've done a long time ago, as the wallpaper design I currently have is old.