Another part of darkly lit room reflects the TV.

RALLY participant:    FUCK YOU! be calling me a nigga.
Hand swaps the mosquito and leaves a GIANT blood splotch on the wall.

Close-up on ELLE, forehead ajusted so that the blood from the previous scene is positioned dead center between her eyes. 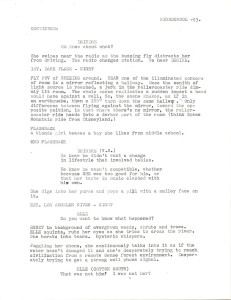 I don't know if this is gonna come out right. I t4end to stick my foot in my mouth a lot.

I remember when I use to use this thing to rant. I guess I've been keeping myself busy with other stuff so that I don't have to rant so much. Lessee <--? I took a golf lesson the other day. Then, like clock work, my friend with no teeth said "Let's go play minigolf." And we did and it struck me that the golf course we used was embedded in my memory from when… I should shut up.

Maybe it could be that I've been trying to devote my time of expression more and more from analog devices. I don't know why I say that because I have this old vintage brownie camera that I love taking photos with and yet I still try to be creative taking pictures with the cell phone. It feels like I'm screaming to myself, yelling at me, name calling. Hypocrite!

Work is nice. Bunch of great folks with tons of tales.

In truth, I tire myself out using the typewriter. I'm contemplating making an attempt to re-focus the whole highschool project (completing a first draft of a screenplay). I think it's going to be uncomfortable making the transition from typewriter to computer, even though I have a sophisticated app for story structure. The only good thing about doing this is probably that I'll be using the typewriter for other stuff. Letter writing. -- That reminds me of the Hunter S Thompson book about his correspondence. -- What a CHARACTER.

I'm almost sad. I loved the idea of writing out all my ideas, as they come to thought, in screenplay format. But, things are getting serious with all the rhetoric I hear on the radion about the elections. It's so dumb. Just wait and see that whomever get's elected, these dumb asshole delegates are gonna elect him for a second term. Or her.

Ok. I'm done. See? Was anybody hurt? Anybody?