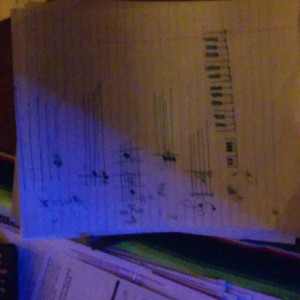 Been listening to HEAVEN TONIGHT by CHEAP TRICK. I'm developing a partialness to side two of the the vinyl edition.

Anyway, I was trying to strum along with the album with my guitar and somehow I stumbled onto c#. Why? go figure.

There was a chord I liked. I dunno if there is anything close to it being played on the entire album, but you know me. I jess like making noise. Anyway, I began to wonder (and think) what could possibly contain these notes: G# E B

Anyhow, somehow I got the idea that that might be the same notes contained in some scale (I don't know about); so I began to brainstorm and C# is where it got me. I guess brainstorming isn't my thing. BEG#

Ooh, and before we end this train of thought, just wanna say that there must be something relevant to anything in the key of C# because, why else would there even be a programming language named C#. Or is it C+?

And you know what?.. after some further scrutinizing, somehow, someway, I've come to the logical conclusion that I was right. If you line up the minor scale notes for the C# minor scale, you get this: C# D# E F# G# A B AND the notes G# E B are included. BEG#
Tags: music
Subscribe to Telegram channel blanketsin.com
Subscribe