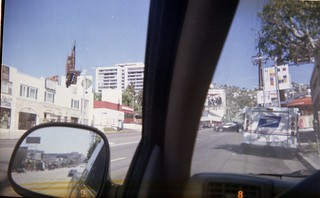 I noticed something odd about the game Ingress. Some agents have put together google hangouts for team members in a small area where they frequently play. Yet, these google hangout enthusiasts don't link there profile with a biography about themselves. It makes me wonder what the true motive for uniting Ingress agents in the area is about.

I understand the need for privacy. In fact, I remember playing Ingress anonymously — before I joined faction group social media sites — and it was good to see somebody walking down the street on their phone and wonder whether or not they might be a player. I'm not knocking the way these hangouts function. I'm sure they've helped agents "level-up" quick, but about the big picture? Google hangouts works fine for newbs trying to advance their level fast, but this doesn't do a thing for increasing the factions MUs (Mind Units).

Personally, I've been too busy to worry about the Resistance myself and I find myself playing when I'm stuck at a stop light, or spending time at the local watering hole. The problem, IMO, is most people have already been to a portal, seen the art, and very likely don't feel the energy from it. For instance, this morning I went to a photo lab store to get some prints from a negative. I arrived 15 minutes early and saw an opportunity to wreak some damage against the Enlightened. This's how I prefer to play:

Whereas other players are more strategic in that they'll focus on strong holds, try to gather as many agents as possible (thru hangouts) and plan a time and day for an attack.

So what's missing? I want to say outreach, but I'm one to talk. I'm sure people have lives outside of Ingress, but it's hard to interweave the time we spend with family and friends with the time that's needed to play. I began to wonder whether it might be effective to download a social map app so that members of the same faction could keep tabs on their co-conspirators at all time. However, to accomplish this, there would need to be a check system in place where, for instance, agents could periodically check in to verify that they haven't turned. After all, it is anybody's prerogative to switch factions whenever they want. Once something like that is in place, I'm sure players will have that much more confidence in sharing strategies with one another.

Oh yes, the picture. Unaware that it was a Jewish holiday, I took some time to drive out to Al and Ed's Audio to look into downgrading my car stereo to a tape deck. They were closed. It was Yom Kippur. Doesn't matter anyway; nobody makes tape decks anymore.