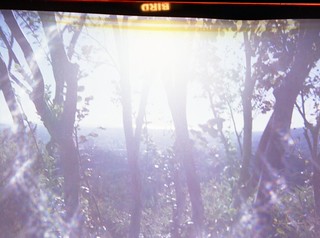 This is a picture of the horizon at the Los Angeles Griffith Observatory. I was amazed, as I always am, that I was able to see the ocean from there. The sun was reflecting a glare off the ocean surface, but I was also shooting in the same general direction of a setting sun. Although the sun was not in the frame, the reflection was enough to distort image quality. This is another Red Scale exposure from the Brownie 127 color film.

I wasn't 100% any of my pictures would come out, having manipulated the negative and flipping it backwards against the black paper. That was a first for me. As a result, I didn't pay to much attention to composition. I was too anxious to get thru the roll and finally get it developed.

Surprisingly enough, the word "bird" appears at the top of the negative. Convenient as the only part of the image to register are the tree branches. If I had filters, perhaps the shot would've had a more dramatic feel. Here, it just looks like a nuclear test site. I guess I have a-bomb in the brain as I recently binge watched the new American period drama Manhattan. This is a WGN network series, not to be confused with the ABC series Manhattan Love Story. It is based in the 40's during the war and the costumes are wonderful. It reminds me of the AMC series Mad men which I could never quite get into. I simply felt it was too bygone days, who cares, old school gobbledygook; and yet the dramatization of the U.S. war effort against Hitler takes place in an earlier time frame. I have to wonder whether it is the boldly defined war effort that sparks more interest than the vaguely insinuation of cold war hidden within corporate structured organizations. I am hooked and I can't wait for next season of Manhattan. Suddenly I'm not so interested in Sons of Anarchy, Game of Thrones, and House of Cards.