What's in a name? Numbers. 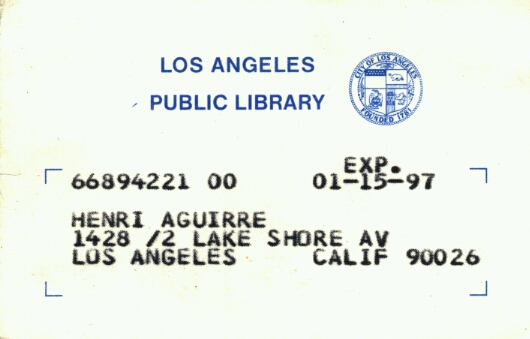 When I started my job at the library, they had already gone digital. The Atwater branch library issued me my new plastic library card. Although I rarely spell my name with an "i", I was just happy that I got my card with the name I always use. At the time, I had already begun to experience the difficulty of bureaucratic red tape, a catch 22 similar to union membership requirements to get your foot in the door of the job one seeks, but not being able to become a member until you hold a job for which they support. As a result, I was exposed to laws regarding frequent usage of nicknames which are recognized as being one's real name instead of what the birth certificate may read. A real smorgasbord of malarkey, if you ask me, because I would constantly see accusatory expressions on people's faces as if i was trying to pull a fast one on them and attempting to get a phoney ID. In a nutshell, the law recites that a person does not need to go thru the legal process of paying to change their name legally; as long as they use the name they prefer all of the time. Eventually it will stick, however, there is no indication of time that this "frequent usage" takes before one stops experiencing odd looks from confused clerks simply trying to do their jobs.

Just to note, library cards aren't forms of ID  that one would call standard means of identification. Nobody recognizes them as proof of anything other than checking out books, videos, accessing the Internet, etc.

And so the term Geheime Staatspolizei, Gestapo for short, comes to mind, as that is how my coworker described the conduct of the chain of command in the library system. Like Hannah Arrendt, who spoke of modern "banality of evil," Camus observed that modern societies in the mid-twentieth century did not produce barbaric monsters, rather, they produced thoughtless bureaucrats and laborers who participated in mass murder through specific administerial and technical tasks.

Also, true that "... slave camps under the flag of freedom, massacres justified by [the love of man] or by a taste for the superhuman, in one sense cripples judgement."* I've come to accept the exceptions for which a convenience can only be applicable toward nicknames of John, short for Jonathan, Steve, short for Steven, Hank, short for Henry, etc. none of which apply to me. Enrique may be more recognized in the southwest, but anywhere else it would be scarcely used and unrecognized as the Spanish translation for Henry. Also, the Italian version being Enrico, Rico for short, might be a common name in the East. I dunno. But one thing is certain, the English is a stickler for accuracy. My cartoon brain visualizes a stereotype checking with the Italians to see if there's any merit to the individual calling himself Henry when all his documents read Enrique. Then, when the stereotype Italians balk at the question, the stereotype English default to following the ways of the stereotype Spaniards. Since the name is of Spanish origin, and the stereotype Spaniards also balk at the inquiry, I'm back to square one. Thank goodness for cartoons. What would i do without you.

*from preface Revaluating Modernity in Messiahs and Machiavellians by Paul Corey.