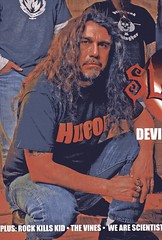 It was in People magazine that I saw a page dedicated to sexy men with graying hair. I don't think men are sexy at all, but if I had a choice to wear my hair like any of the people in the photos

How original is that? Since I started to let my hair grow, I haven't stopped hearing from my parents how ugly I look. In fact, my nephews call me afro boy. Today I participated in the Thanksgiving festivities just long enough to chow down, but of course, it wouldn't be a traditional family gathering if my older sister hadn't told me "You have to cut your hair!" Eat me.

The excuse my mother persistently used to nag me about my hair was that I can't be original. This "original" business started with my dad when he finally got the hint that my hair would never be the same as when he use to play barber with my head when I was between the ages of six and twelve.

I have news for you, folks. Take a gander at the originality of what People magazine considers sexy, gray hair. How original that it should all be so short. If for some reason I find the right girl to marry and decide to cut my hair for the wedding, I think I will have to dye it a little orange and yellow, a little green and spiked. Although I'm sure most people would rather that my hair be tied behind my head to give the impression of shortness at least from the front. Since when does anybody tell their guests what to do about the way they look and expect in return pleasant conversation throughout dinner. Fuck that. I left that humble hospitality faster than it takes me to draw a stupid little cartoon of what my fat sister looks like these days.