Remember when you could cross post to your blog so easily using flickr? You didn't have to worry about DIV elements, floating elements, SPAN styles, etc. Why would flickr remove such a convenient feature? 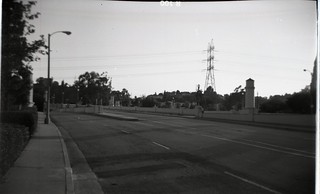 Yesterday I saw a cat and called it over. It was a young mix breed that looked a bit callico and a bit Siamese / Burmese. Anyway, it allowed me to carry it and I gave it some kibble. l miss having a cat around and I was ready to adopt this one but I'm sure it already belonged to somebody else.

Wish I had taken a picture of it, but I don't have a flash for the Brownie. I probably should search Ebay to see if I Could get a bargain for one, but now that 127 film is so scarce ... what for? Daytime pix works just fine for me. I'm considering making an attempt to make my own 127 film. I have found plenty of DIY sites explaining cutting down 120 size film -- and I want to log my efforts in the blog -- but I don't have the black paper film backing. w/o that, I can only try unwinding an entire roll of 35 mm and respooling it into the camera after I block off the light leaks from the little red window.

The whole point of using the Brownie in The first place is the Medium format film. I still can't see the point of using 35mm. Currently, the Brownie has a roll of Color film in it; of which three or four exposures are used. I went to the park on the day a woman was found floating in the lake. No, I didn't quite get there in time to capture such a grim scene.

I guess what I'm going for in my exposures is interesting backdrops with the blurred effect cause by distance and the vignette these old cameras produce. It would be nice to get people in my shots too. I'm still working on that. There's gonna be a concert for GRIND CORE lovers in Boyle Heights in July and I just might be able to convince some girls to go wild for the camera. We'll see. An in-focus boob closeup and its blurry Twin would ideal.