dim views thru my Brownie viewfinder 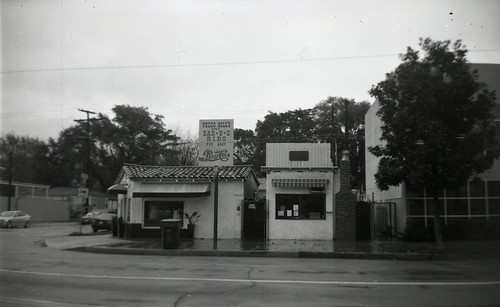 This is a picture of one of the Ingress portals around Burbank. It wasn't raining too hard. I can't remember the exact date I took it and it's making me feel I should be keeping a log for all the lomography pix I take. I'm considering adapting 35mm to my brownie camera. Apparently there are ways to get the spool into the older models. However, I think I tried this idea before with the box camera I have, a "Holiday Flash", and it did NOT fit; so, I may have to go the route of respooling the film in a dark room to the regular brownie camera spool and then block off the red window that normally would allow the photographer to advance the film frame by frame.

Here's what I don't like about this idea. If I go this simple route of respooling 35mm (without the paper backing which 127 film comes with), I'm stuck using guess work to advance the film. I have a Holga toy camera that uses 120 film, but can also accommodate 35mm. When the 35mm is used on a Holga camera, advancing the film is done by using a template which shows numbers on the winding dial. For this technique, the photography has to remember what frame he is on and when I was still using my Holga camera with 35mm, I was becoming quite accustomed to doing so, though the Holga is so much larger and bulkier than my box camera, I discontinued shooting with it.

The spools are the same size so I'm guessing the template will apply to the Brownie as well. I've just got to figure out a way to affix a smaller version of the template sticker to the knob of the Brownie. I can see myself carrying a monocle around as I take pictures around LA just to be able to read what exposure I am on and advance the film to the next frame.