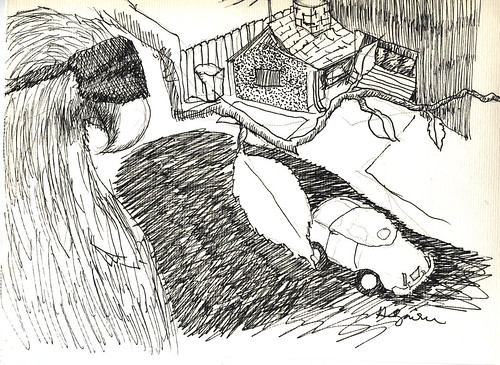 Yesterday, I wasn't in the mood to draw. I was trying to get into my book Clan of the cave bear, but that wasn't panning out either. I sat an watched something on KCET about some guy named Palin traveling in Africa.

I was trippin' on the camels. Such unique creatures. They looked like dinosaurs that were brought back thru DNA technology. But anyway, it's morning now. Hope you all have a good day.

The attached illustration was done using a Stædtler 0.7 pigment liner. I usually buy these permanent markers to write on CDs or DVDs, but I haven't been burning neither of those lately. You can still see the pencil marks I did using my left hand. When I finally went in with the pen, I was already comfortable with the comp to just fill in the lines using better dexterity. The stippling always makes me feel as though I'm going to ruin the pen because the tip will sometimes get squished back into the hollow base where it protrudes, so after I got done with that, I pretty much started to handle the pen as if it was on it's last legs. Scribbling like a madman, I managed to get that drying pen effect that you don't really get when using a dip pen. I like it. I thought to myself, I've gotta do this more often, restock on these babies and maybe find a variety of different tip sizes. Maybe in September when Swain's has their yearly discount sale.