Did you notice the angry face? 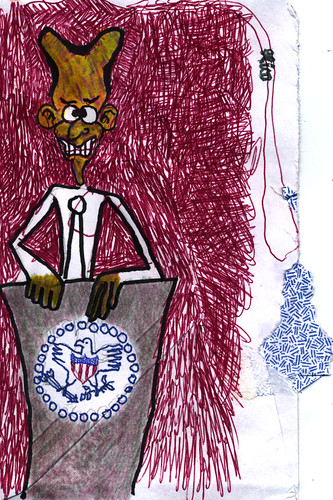 Did anybody notice how red in the face John Boehner was during Obama's State of the Union address? Maybe it was the network, but the skin tone in his face contrasted against the prez as well as the vice-prez. He looked steaming mad. I thought his face was going to explode any moment.

Regardless of all the encouraging good things that the prez said yesterday, are we to believe that Americans really accept an administration in the white house in which the Speaker of the House sports such a sour expression? That is nonsense. It's like telling Americans that their government consists of such opposing law makers that they should get used to living in a country that is screwed.

If there ever was an anti-christ, nobody could portray him better than our current prez. He's got the horns that goes with the job too. Just once I'd like to see him raise his hand in tribute to the heavy metal sign of the horns while on camera. I wish I was able to come up with a caption for this mess. I slaved over this for about 3-1/2 hours using my left hand and the few writing instruments available at work. I had at my disposal red, green and blue pencils which is how I managed to get skin tone and a woody look to the podium.