Have a gothic halloween 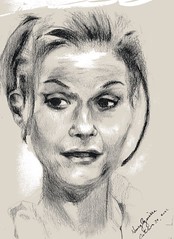 Stranger things have happened. Earlier this month, I received E-mail from Germany to an AOL account I haven't used for years. Why the change? Who knows?… I mean, I check my last letter prior to its response and nowhere does it show my AOL address. However, it was my friends b-day in September, and the e-Card I sent was from a site (American Greetings) that I had created back when AOL and I were still on speaking terms. So, that explains that.
How coincidental is it that I would tune in to Law & Order CI for the first time, and a NK look-a-like appears as a guest star? Not much. I checked IMDB to see what she's credited with in TV shows, I replay the beginning of the episode to read the contributing cast, but NK's name doesn't appear. So, if she regularly works on TV shows for which she doesn't receive acknowledgment, then no, it's not a coincidence. Then again, I wonder who Mrs. Lila Gibbs character is played by in BEDFELLOWS. Remember, I use to thing Penelope Cruz resembled her.
The DVD I loaned to a friend from work is very likely a goner. Apparently, my co-worker seems to think she's already returned it. What else that's weird has been happening? Eli stopped by the library. I couldn't remember which movie star she reminded me of when I say, "You remind me of an actress." Then, during the course of work, a DVD miraculously appears: God is great. I'm not. Why I couldn't remember Audrey Tautou's name is anybody's guess. Eli only slightly resembles her and couldn't possibly be her. Duh. I think the only normal thing that's happened is I have learned to make a decent capuccino.

See image above on flickr.com