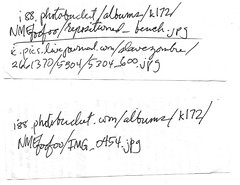 Where's del.icio.us when you need it. I was struggling to get these blog entry pix and only managed to jot the url of the jpg file. So… I guess I'm gonna wanna spend some time online finding the wordy entries for when something turns up. Hmmn, but what?

How boring is that? Techy news. Heh, but I'm sure nobody blogging these days concerns themselves with such rubbish. I mean, how on earth can anybody incorporate some html coding in there tweets/fb so that when they 'magically' link to a blog as individual entries, you can see the hotlink, or the bold text, etc. I like to think that bloggers are much more concerned with mysql sort of thinking. And if that was the case, then what happens when one day fb crashes, or twitter loses all history of previous tweets? To this day I don't know whether tweets dating back several years are readable, but then I'm not a big twitter person.

So, my analysis in seeing that hash tags go quite well with mysql sort of programming, I wouldn't doubt bloggers and distancing themselves from the art of desktop publishing (or typesetting). Instead, when they get a readership, I imagine they use that leverage to achieve publishing their writings old school ways. That is to say, old school publishing wherein publishers big and small are merging their publishing practices to digitally publishing their copy. Sad, isn't it. When that happens, the blogger becomes so popular, nobody would dare accuse them of being a "Sell-out!"

The way I do things is slightly different. I almost achieved what the college boys have done with their mysql programming language, but I came up short. My Intranet contains as many of my lj posts possible, but I managed that by first typing my blog entries into it, then copying and pasting it to the lj plug-in app. It's a dire process, but it's very close to typing on a typewriter. And I like that about it. I don't have a live ethernet signal to constantly pause my writing to look up a work in m-w.com or some other dictionary style web engine. Expect typos in this entry

So, grabbed me these links to incl. in a tweet about the missing wood bench I made for work. It all began when I became friends w/ Deirdre. She was fun to hang out with, a real person that I could relate with and spill my guts. Her and I take work breaks together in the back of the building where we work. I made a wooden bench so that sitting back there wouldn't involve the concrete step to the electrical panels.

I really should get a calculation of how long that bench lasted there because if I ever come around replacing it, I might want to chain it up to something. A cable would be nice, I think. Sad, but true. I work in a residential area that consists of thieves. Well, not everybody is a thief. That would be unbearable, huh?