So, on Thursday it was understood that my riding partner and I would leave Cody, Wyoming at the break of dawn to avoid the tourist crowd going thru Yellowstone National Park. I woke up at 5AM and took a quick shower. The moment I got out of the shower, I hear the roar of a motorcycle engine similar to that of my buddy. But there are so many bikes parked out in the street, I figure it could be anybody's bike.

It wasn't until I started to organize my things to pack my bike that I thought to wake up old sleepy head by turning the lights on in the room. Surprised, I find a note on the table. It reads: 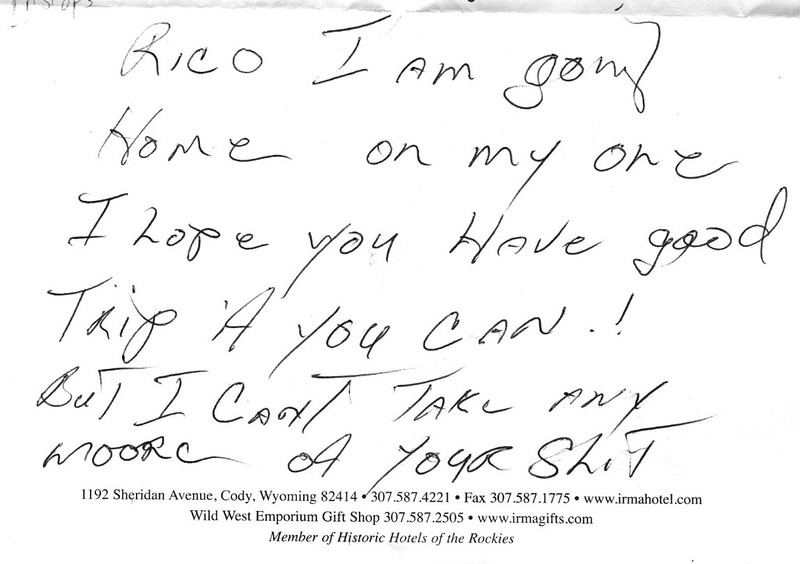 Thinking I would see him on the road, I kept anticipating seeing him en route to Evanston, Wyoming. Miles ridden were 514 that Friday. We discussed it as our destination for the day and I was optimistic that I would see him there. However, I didn't even get a phone call. I would've called him to see what was up, but he really went off on me about my riding skills the previous night when he became upset that I used the hotel ice bucket to rinse the rag I was using to clean my bike with as he felt that it was understood he liked filling that bucket with ice just as he had been doing on previous nights. Why did I do it? He mentioned earlier that he had wanted to grab a beer after our ride back from Sturgis at the local Hulett Saloon; so I figured he wouldn't be filling the ice bucket for his ritualistic soda.

Yesterday's ride home from Vegas only took 269 miles. Almost nothing compared to the average distance being covered throughout the week. The only challenge was doing it after a night of debauchery at the Crazy Horse. Nothing too outrageous as there is a limit to what strip clubs will allow (for the kind of money I have). Not having worn a watch for the trip, and not really having time to check my phone for the time, when the exit doors cracked open for me, I was surprised to see it was morning. 8:00AM and I needed to sober up for the check-out time of 11AM at the motel6.