Dry mouth and other SIDE EFFECT 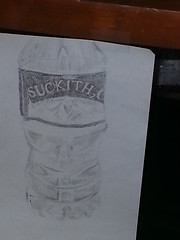 Just sat thru a screening of Side Effects in the comforts of my living room. I was reluctant to see it at first because the DVD jacket just wasn't screaming out to me like the movie poster for Your Friends & Neighbors. But I won't review this psychological trhiller because that's just not going to get you to make up your mind about it.

Deirdre is a name I've been wanting to use in my own original screenplay, but just haven't been able to overcome the hurdles. Watching this movie sparked some inspiration, and also instilled doubt that I could ever top the Deirdre character from Side Effects.

Here's one idea that sparked as I was watching Rooney Mara cope with anti-depressive subscription medication. You know how when you smoke pot one of the symptoms can be dry mouth? And, you know how smoking pot way back when it was still illegal and you were just an adolescent brought you and your friends closer? My idea for this scene I'm working on is kind of an in depth analysis of those early years with cannabis and withdrawal symptoms.

Try to remember the first time and how the high you were experiencing could've gone either way, a bad trip, or a cool high. Then, think back to those times when you smoked it with friends and knew more or less what to expect. Finally, if you were one of those smokers who enjoyed reefer madness, how did you manage to quit? Remember? Did quitting involve distancing yourself from your pothead friends? But who's kidding who, you still managed to get some pot and smoke it alone in your bedroom. At least that's what I remember when I was an adolescent.

The question is, does pot teach people to lie to themselves? I guess I use to hallucinate about UFO's hiding behind clouds, parallel universes in which life is repeated an infinite number of times, and god knows what else. All I really got out of it was that I was learning to lie to myself and accept these lies as truth because there still isn't a UFO apocalypse, and I don't feel reincarnated. So…

Let me put it another way. When you get high, life seems good. When the pot wears off and reality sets in, life is no good. Therefore, when a person smokes pot, that person feeds himself a load of BS because it would be impossible to remain in that state of a THC high forever. All the movies I've ever seen about pot smoking have emphasized the euphoric aspect of it, never the possibility of brainwashing.

It's like, people would be jumping off bridges if it wasn't for pot, yet nobody cares enough to realize it. I once heard that pot is what the first nation peoples smoked in their peace pipes. I can see how being high on pot would make anybody tolerant of their most worse enemy. While pot smokers say it's a way of life and non smokers say it's evil, I'm here telling myself I can write a scene that would convey a perspective on the drug as simultaneously being euphoric, memory altering, and conspiring. Hmmm.