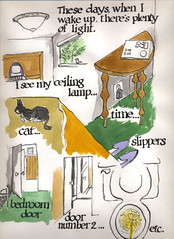 I've been stumped in a certain scene I've been trying to write.   It basically covers morning rituals in a blasé vogue.   From the moment the character in the story opens his eyes, he sees the ceiling lamp, his eyes pan over to the window to see day break, then the cat.   From there, he lifts himself out of bed and searches his slippers while checking the time.

I think there is more to the walking thru the house to get to the bathroom, however, which is why I'm getting so stuck.   There is a certain limp I do not know how to convey in this sequence without pointing the camera to the character.   I suppose it can be done by simply holding the camera while one walks to their destination AND mimicking an exaggerated limp for the purpose of camera effect.   Would it be understood? I dunno.

And maybe it's just me, but I find when I've been off my feet, it takes awhile to get the blood circulating.

These drawrings were done, I think, way back in 2008.   At least the rough sketches were done on the back of a calendar with my work hours for September '8, so… I left out the fish tank as a morning ritual, and because the rough sketch shows a goldfish in the tank, I'm 99% sure I've been hording this trash for five years.   And I'm still not done because these objects are supposed to be done in storyboard format.   The way I've done it here reminds me of my eye doctor diagnosing my eyes as eligible candidates for Macular Degeneration.

Ever since I can remember, I've always left out blank spots in my drawrings, but I think that's only because I wasn't very good at it, the blank spots I left out were usually a result of the pieces of the puzzle not fitting together proportion-wise.   For instance, a scenic landscape where a palm tree in the foreground of a skyrise building doesn't intersect the way it appears because I didn't take into account where to draw the base of the trunk.   That sort of thing.

Now look at me. Geez.