the bio meme - by wordweaverlynn (but I was prompted by blythe025) 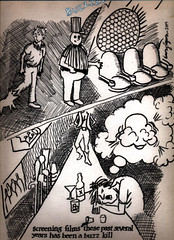 I lived in a house smack dab between downtown and Hollywood. It was a decent size house, with a storage room adjacent to the laundry room that would've made for an excellent bedroom. Being the youngest and terrified of closed spaces, that didn't happen mainly because the only entrance to the storage space was from the backyard. I guess my parents thought I would've had girls in and out of there all the time, even at age twelve. So I slept in an enclosed patio which was as small as a jail cell and cold as Machu Picchu during winter, while my sisters shared a bedroom and my parents shared a second bedroom. Now I live in the house behind the main house where I grew up. While not to be mistake for the storage unit, I pay a reduced rent because the landlords are family. I'm in close proximity to public transit, night life key points, and I've got a view of the citiscape that can impress the typical out-of-my league kind of girl.
I rode a Schwinn ten-speed. I took that bike on some long stretches of "running-away" mind frame expeditions. On the days when I went to the USC dental offices for my orthodontics appointment, I rode the bus. Now I drive a Chevy S10 pickup truck and ride a Harley Davidson. I don't commute very far to work, but traveling by bus would be more of a hassle since it would involve transferring to two different lines for a location that is only a ten minute drive on the freeway.
I was in a relationship with "the broad" whom I stalked during recess and lunch. She was a rebel who strayed from the norm of playground herding during lunch when she and her girlfriend would escape to a far off corner of campus during these breaks and play on the bungalows (exercise bars. aka monkey bars). Now I only have meaningless flings with girls I meet at bars, or if that doesn't pan out, I go to movies with the common housefly.
I feared gangs. I associated them with violence and killing as a result of a cousin who met an untimely end. One night, my uncle, a war veteran whom I feel looked and acted a lot like Ernest Hemingway (though I've never met Hemingway), rang our doorbell in the middle of the night. It must've been winter because I had moved my sleeping quarters to the living room sofa where the front door was, and my uncle was bawling incoherently trying to confide with my dad over the discovery that his nephew had been slain. Now I fear bears, mountain lions and the occasional text messaging driver.
I worked at home helping dad with the yard work, white washing fences, painting the house and just being a miniature version of him. No allowance other than what it cost for a bus pass to go to school. Now I work in a library. I wish I was a librarian, but I quit going to college before ever entertaining the idea that a degree in library science might be an option. I worked in a library as a Page when I was in high school too but I had to quit that job when I dropped out of high school.
I wanted to be a cartoonist because I could make my friends laugh when I drew their favorite cartoon characters. I loved reading comic strips. My favorite illustrator was Sergio Aragones of Mad Magazine. I also loved Gary Trudeau, creator of Doonsbury. Now I want to take long weekend trips to a remote location near a river where I can camp and fish for trout. I would set up a portable typewriter to work on the great American novel/screenplay and read Hunter S. Thompson so I could create a unique style of writing the way Hunter Thompson invented Gonzo Journalism.