If you want to be successful as a writer, you can't go wrong by hanging out with librarians 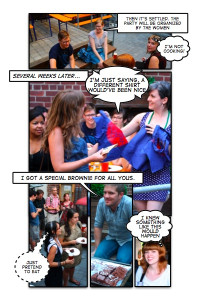 Still haven't trekked my way to Hemingway's Lounge. Every time I make my way out there, on the way home from work, I get this negative vibe that ranges anywhere from 'how to get home after having a few drinks and avoid any encounters with the Hollywood beat popo' to 'what if a bunch of snotty librarians hang out there and I end up feeling left out'. I don't think I've ever been any good in a "new school" kind of environment, but the watering holes directly along my route home are few. I've got to suffer traffic because a bee line to Hollywood doesn't include the freeway, it's so close. Then there's the criteria of what day of the week would make for a memorable night of exploring the local bars. While Friday and Saturdays are fool proof done deals, those nights only increase the likelihood of having to hail down a cab and leave my transportation behind.

I digress, nevertheless, that being in Hollywood would allow for recuperation while sitting through a 90 minute movie. I know it must sound a bit psychotic to be planning a single night alone for a drink or two this way, but damn it! where's my birthday beer I was promised by the welsher at work!!! Talk about flakes.

So, in an effort to put this thing together, I stumbled onto an article about a blog maintained by volunteer New York librarians. While I'm all for meet-up rendezvous, it's the pictures I can do without. Who does that? I mean, it's understandable how somebody going out with a group of fellow co-workers might want to take a picture for prosperity, but when I go out and meet total strangers at meet-ups, who cares?