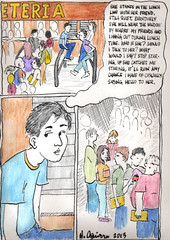 Can't see myself doodling for illustration friday anymore. I took a moment to clear off the drawing table. Shoulda done that long ago. I get a big kick out of uploading my public update in screenplay format. After pulling up a few online pictures of vintage typewriters, I notice that many of the pictures deptict all the necessities on the table where a writer types out his manuscript. Pencil, eraser, paper, paper weight. One thing I hadn't accounted for is the glass of liquor. Or beer. I think that would be useful in getting the words flowing so that I wouldn't have to write my rough drafts out on paper first.

I could be wrong about the brainstorming process, though. It's become habitual of write out my entries in college rule paper. I've mostly used a ballpoint for this, but I'm slowly transitioning to pencil.

I feel I need to explain why I write in a screenplay style. While updating my blog has always been something I could do to relax, it began to get frustrating when I would try to implement some of the ideas in my entries to the screenplay I'm working on (been working on for eons). So, I just decided to type it all out on paper and scan it into the computer as the blog update. This way I already have a rough sample of what it should look like when I incorporate it into my screenplay. Mwahahahaha. Two birds, one stone.

Anyway, I think the concept of screenwriting is so juxtaposed with the idea of blogging in that bloggers who update their blog are literally "screen" writing. I say screen because a blog update appears on the computer "screen". Anyway… this shall be the only way I freeform my updates to my blog. The illustrations will be scenes from the screenplay without explanation. I'm just hacking them out as they appear in my head. This one Is Ana Elle is supposed to be the flashback that functions as the main conflict of the story.