The process of writing "secret"

I got the idea from a blog I stumbled on years ago called ice-cream monster. The artist behind the cartoonish illustrations would post her finished pieces in stages of completion. I've always wanted to do that, and still do, but I find my current hobby is in developing motion picture screenplays on a manual typewriter. 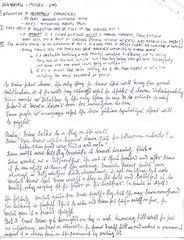 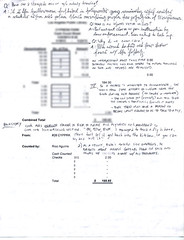 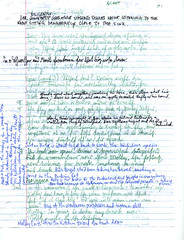 In these scanned images, what you don't see are the URL links I include in my lj entry for the latest information on an upcoming movie I'm curious to see. That kind of thing doesn't fit into the process of creative writing, though I didn't consider placing any hotlinks for this scene until mid-point. It would be a very convoluted rough draft to include the idea for a short story, interrupted by links to various external websites. While it can be done, and you might say it's an objective to accomplish in future typecasts, you all know what a website address looks like and I doubt there's any interest to see the sticky notes I jotted them down on here. 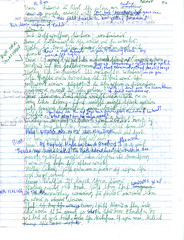 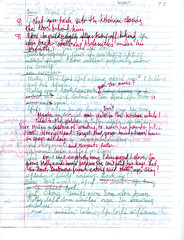 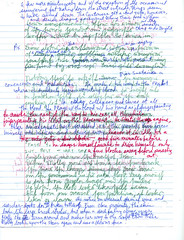 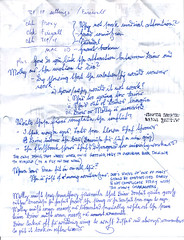 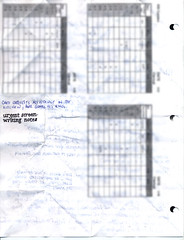 What I do find a need to explain is my horrendous chicken scratch. I do much of the brainstorming at work when business is slow. Holding pen in hand is easier to drop on a moments notice than detaching myself from a computer keyboard to address a customer's question. So, I like to write in this Sutterlin script which makes things difficult to read for others who aren't familiar with it. I'm convinced that the conversion of chicken scratch to printed word is the thin line between being creative and publishing something serious.

I know it's far fetched and the controversy between self-publishing and real publishing is obvious, but take the hyperlinks I created in "secret" and notice the conflicting information on the movie The Truth about Lies. While people can simply refer to the latest updated website to base the accuracy in information about that yet to be release film, what's missing is the conflict that occurred between different directors, change of cast, etc. If I'm wrong, it's because the Internet doesn't clarify the differences between the title The Truth about Lies and it's many productions.