The Rock Inn is a popular destination for bikers 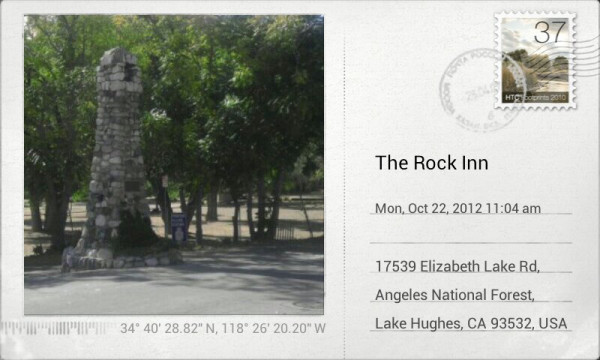 Yesterday was the Love Ride, an annual event that's been going on for a long time at Glendale Harley Davidson. Admission was $50, but I decided not to go. Instead I rode my bike thru the canyons in Canyon Country. I have to say that the ride I took was better than participating in the ride from Glendale to Castaic Lake which I took part in last year. That's all the love Ride really is, a group of bikers riding on the 5 freeway from Glendale to Castaic Lake. The only big deal is that the motorists driving down the same freeway have a WTF expression on their faces.

My planned out route was expected to be about 75 to 80 miles in distance. I was happy about the weather. It was not too hot nor too cold. And, thank god, it didn't rain. The route isn't outrageously difficult to memorize. I wrote down the roads I needed to make turns on, as well as distance along the road I needed to travel before my turn out neared. Although I wish Janine would stop smoking, if it isn't for her request to stop in the middle of nowhere to stretch her legs and have a smoke, the ride would not have been the same. It's always nice to have somebody to share the scenic views with, and the trees that covered the mountain tops were nice.