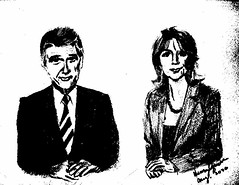 This kind of sketching is always fun to do. I'm not afraid of drawing faces regardless of how unlikely they resemble the subject. Drawing faces actually gives me a sense of intelligence. Perhaps it is an ability to study facial characteristics and apply them to different people. I don't know. Maybe it's just because I don't have any scruples to realize that skills like these are useless in the real world.
I know I'm bad at this. I couldn't bear adding a caption, it's so bad. I like composing editorial cartoons to keep a sense of humor about things, but I can't find anything funny about this investigation, aired last Wednesday. Here, this dynamic duo is shown wearing a black and white suit tie for Henry, and a tube top with coat, for Garcia. BTW, I didn't get so much as a nibble on my laptop, damn.
I don't find anything funny about City Controller Laura Chick's response to Ana's question. Chick says, "I think there was a lot of playing going on behind closed doors in City Hall."

A grand jury investigating LA City contracts has indicted a former city commissioner, Leland Wong. You may not recognize his name, but they do at City Hall. 49 year old Leland Wong is considered by some as a career commissioner serving on three different boards: the port, LAX, and the Department of Water and Power under Mayors Bradley, Riorden and Hahn.

In 2004, shortly after we began investigating how contracts were awarded in the city of L.A., Wong resigned his post as a DWP commissioner. Today Wong pleaded not guilty to a 20 count indictment charging him with accepting a $100,000 bribe in exchange for extending a lease at LAX for the Evergreen group. Wong is also charged with embezzlement and filing a false tax return.

Based on the alleged conduct, if it's true, he was here to help himself.

City controller, Laura Chick, who began auditing contracts as a result of our investigation says the airport was the most troubling.

What would you say was the climate at the time these investigations began and when you did your audit?

The witness list called by this grand jury over the last three weeks reads as a who's who from the last administration.
Former Mayor, James Hahn-himself, testified. So did his former chief of staff Tim McOsker, and former Deputy Mayor Troy Edwards. Edwards resigned around the same time as Leland Wong. Wong's attorney says his client is innocent "and has been victim of a political witch hunt and will be exonerated". He was released on his own recognizance.
One thing that has changed at L.A. City Hall as a result of all these investigations, City Commissioners are no longer permitted to fundraise for the politicians who give them their plum appointments. Also we were unable to reach the Evergreen group about that alleged bribe.
Tags: cartoonys, illustration
Subscribe to Telegram channel blanketsin.com
Subscribe