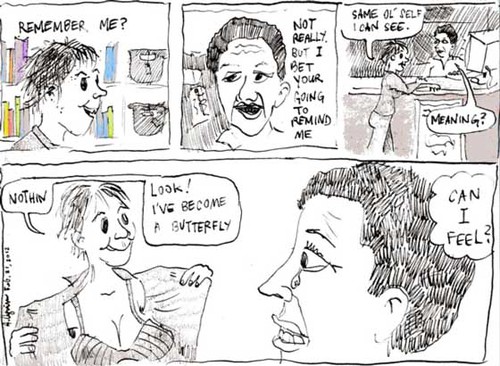 I never would've guessed that Kill list would end it's theatrical showing as quickly as it's premier. Oh well… I hope it was for the best. If there's anything that can cause me to have a bad day, it's wasting several hours watching a bad movie. I rather entertain the thought of how exciting pulling the triigger of a singly chambered revolver to might head might fare.

I didn't get out to see this flick. As much as I would've liked to, I spent my evenings watching DVDs complements of my local library. I just finished the complete season one of Deadwood, with the exception of episodes one and two. That's the shits about postponing vice for watching my fav TV/Cable shows. If I were to wait until the shows became available at the library, the mentality is, if I can wait this long, why did I want to watch it in the first place? Season three of Sons of anarchy and season two of Game of thrones have been sincerely missed, but I don't want to fall victim of scratch mark blemishes right in the middle of watching these seasons. Is leaving me hanging on a replacement disc the new fad?

The reason I haven't seen episodes one and two of Deadwood's seaon one yet is because I had to obtain the complete season from different libraries. One library only had episodes 3 thru 7, another library only had episodes 8 thru 12, and yet a third library had episodes 2 thru 18 (or whatever), but since I had already requested volumes 2 thru 6 from library 1 and 2, it was redundant to ask for the incomplete season from library 3 since I still had to look for a fourth library who would be able to send me volume 1 (episodes 1 and 2). Screwy. As far as 1 and 2 goes, those episodes have been delayed in the delivery and I wasn't going to wait for them to show up since there's never any guarantee I'll see them at all. All the other episodes arrived on the same day but it seems the delay in delivery will only result in an added effect, the way mainstream movies tire of coming up with sequals and start producing prequals. Duh.

Screw that. I mean, I do like the money I'm saving from cutting my cable service. And I'm hoping that netflixing these DVDs (Sons of anarchy and Game of thrones) isn't going to run amock as does the library system's lack of quality control. Yeah, yeah, yeah. I'm forgetting that the DVDs at the library are free, but how would it feel to you if you had planned a week of R and R before going back to school and all you wanted to do was veg out in front of the TV with free DVDs from your favorite show? Going to the library and checking out a full season of a show like Sons or Game of thrones so that you can start watching them chronologically would result in a kick in the head when you find yourself stuck with a scratchy disc. Because you are on a schedule, however, you decide to skip the blemished disc and whatever episodes are on it and jump to the next disc. To me, that's like walking in to a theatre thinking you managed to miss only the first five minutes of the movie to discover a half hour later that you walked into a movie that was already half over.

And that's exactly what happened to me at the Pasadena Playhouse. That's why I was reluctant to go there just to see Kill list. One day I had gone out to Pasadena to watch a movie, but I wasn't aware that it was showing on two different screens. You know how the ticket taker usually looks at your ticket and guides you verbally as to which screening room to go to? well my ticket taker that day was an old tired hag who only managed to grumble at my ticket in some incoherent cow noise. "Mooo." That kind of thing totally spoils the movie because you already know how it's going to end. Who would even want to bring the incident to the manager if one can almost hear him say that he would credit my ticket for a second showing. Fuck that. The only thing that means is an additional two freaking hours wasted if the movie is a dud. I try to limit the time my ass is in direct contact with the lice infested seats in mangy theater houses. And asking for a full refund would only cause my intestines to acidify and dissolve into themselves. No thank you.