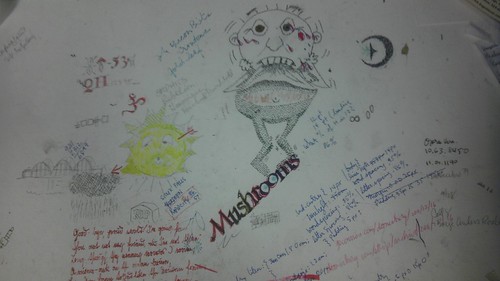 It is getting to be that time again. Time to change the blotter sheet on my desk. I already turned the sheet upside down a while ago. There's nothing as interesting on the back that's more eye candyish than this. I started brushing up on my calligraphy in case I make an attempt to write down the names of children on their brand new replacement card. I know I shouldn't because it's too time consuming. I have get into the habit of asking them whether or not they would like their name printed on a label on their card… so that they don't get their new card mixed up with their lost library card if the lost card turns up down the line.

I got a balling out this week after the boss received a call from somebody's parent complaining that I treated their kid rudely when the little urchin visited the library on a class fields trip. I said only what I would say to any young adult under the circumstances. You cannot use your parents' library card unless they've officially authorized you as a user. And, the account has a $17 balance anyway, so even if your mom was here, she wouldn't be able to use the card until she paid the fines. Then my boss is bringing up incidents from the past in which patrons complain about my manner. SOB! That was several months ago and since then there's been some adjustments made on the way my coworkers passively show patrons special treatment (in an effort to get on their good side, no doubt). I'm not talking about favors. This is about rules. I'm expected to enforce rules and explain rules to patrons. So why am I the only one doing this? In the most recent staff meeting, the boss instructs everybody that the book detection alarm must be treated seriously, and a simple wave of the hand to a patron who sets it off while leaving to continue on their way, as if the clerk is aware of a mistake they've committed in forgetting to deactivate the alarm on the books, is unacceptable.

Blah. I said a mouth full.

Then, one day, a librarian sees that a line has built up, so she lends a helping hand by taking a few patrons and checking out their books. What happens? The alarm goes off. What does she do? She tells the patron "Oh, it's okay. Go ahead." Instead of calling that patron back and deactivating the alarm for their books like I believe I'm expected to do.