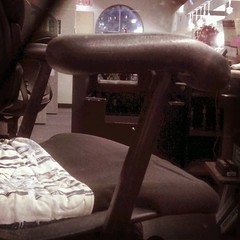 What is my definition of blogging, anyways?

My blogging style has changed. At first I wanted to try uploading sketches and funny cartoons so that my illustrations would resemble actual syndicated comic strips as seen in your local newspaper.

In fact, the picture of my notes containing rough stage of 2nd act conceptualization is uploaded where all my drawings were kept and linked to my lj account. But what does that have to do with anything that this entry is about? Simply, that I don't care about the idea of journalistic accuracy as much as I try to focus now on creative screenwriting. Before the change, I would upload my amateur doodles and arrange them with dummy text, although the placement text I was using was coming out of my head. I would just type whatever came to my head for the sake of filling the space next to the cartoon, as though it were a copy of a page from a newspaper/magazine. That's probably the closest I ever came to flirting with journalism, though I have been wanting to write stuff for publication on technorati dot com.

My handwriting in the picture

is done in Sutterlin (sütterlin). It's a pain in the ass to read, but it giveS me some semblance of really publishing stuff I write. When I translate the handwritten text to keyboard, I tell myself "There. Published!" because I wouldn't expect anybody else to try to decipher this forgotten form of the alphabet.

The photograph above is where I brainstorm my ideas. It's so peaceful and inspiring. I must remember to turn the picture 90° sideways.