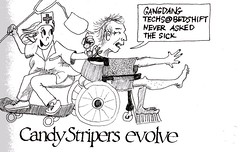 cs2bsh
Originally uploaded by blanket sin.
Well I have to say that I was this close to forking over the money for a $100 pass this year. I was all excited about the contents that came with it (1 gift basket consisting of wine, crackers, caviar as if, and a blanket). Ooh wow, a blankey. I'm the king of Linus's everywhere and can't be without my wool blanket even in the summer time. I'm talking L.A. summers.
Believe it or not, I have grown up since the last couple years. I don't need no stinking blanket for security anymore. Well, at least not in the summer time. I called the number to the box office and inquired about Porch Parties. But I mistakenly confused Poolside Chats with Porch Party and the ticket dealer said Ford Amphitheater passholders would not get me into the "poolside chat". According to the ad supplement, Porch Parties are for passholders only. My mistake. I couldn't differentiate between Poolside and Porch Party. Damn! I'd be having fun right now.
"No, I'm sorry but the Ford Amphitheater passes do not include access to that because…"
I know why. The Ford Amphitheater is on the other side of town. So I notched them off a point in my pros & cons list of participation in this years rubbing of elbows with the Hollywood film crowd. Then, I asked the box office dealer what kind of blanket was included in the pass for $100. He gave me the direct number to the Ford Amphitheater and asked me to call them. All he really knew was [blankets] were of high quality Target merchandise. I took that to mean they weren't wool, high grade wool. None of that Alpaca stuff.
Another notch in the cons column for 2006. Maybe next year, but I would've loved to have had a reason to take my prehistoric 35mm camera and just take photo after photo until the roll of film that's been lying in that camera for years now could be taken in for processing. I don't know how groupies do it. I went out for a smoke during a concert at the Key Club in between bands. People are hanging out, doing business, mellowing out, and who knows what else. I would've loved to have had my camera with me there. Lessee, the concert started at 7:30p, the sun set at about 8 or 8:30p, the concert ended at 12 or 12:30p. What would I have done there while I waited for somebody interesting to pass? How do peeps keep from getting bored hanging outside of their fav band during a concert? Surely they don't buy tickets if they're not going to see the show. Or do they? It would be different if I was a toker and a smoker. In a situation like that, the thing creative types must ask themselves is this, "What would Hunter S Thompson do?