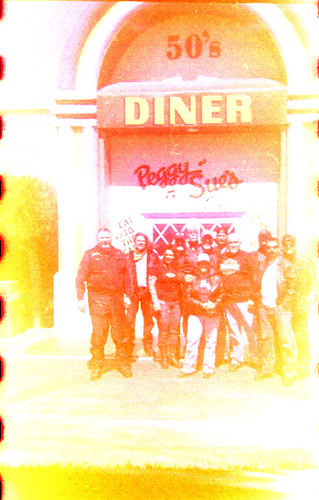 I'm in this shot, so it's impossible to pin the blame on me for any flaws you might find. Surprisingly, people are still willing to bother to take a picture with the vintage Instamatic. I can't stand the way I scanned the negative with the yellow color dominating the scene. This one is probably worth trying to scan again, isn't it?

The guy who offered to snap the shot was nice enough to tilt the camera on it's side to capture the full effect of the background (I really gotta invest in a new camera.) The thing about the Golden Half 35mm is that landscape and portrait positioning is reversed. What I mean is, because the camera exposes two pix per normal sized frame, centering objects is different than shooting pix with a regular camera. So, say the person tilting the camera to take this shot had used the Golden Half camera. It would've resulted in a vertical shot, in which it's possible that our feet and the word DINER would've been cropped off.