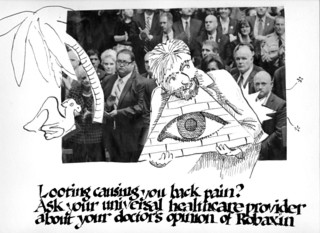 The book starts out interesting enough. I mean, it manages to hold my interest. While the chapter headings, or should I say section headings, are confusing in that I don't know what the link of 'adult undergarments' has with the contents of that section, and why am I thinking of "depends" when I hear the term 'adult undergarments'? Shouldn't I be imagining lingerie?

The first occurrence of the term is a lengthy paragraph consisting of probably 100 words. "He had to modem in to the agency and say that there was an emergency and that he was posting an e-note on a colleague's TP asking her to cover his calls for the rest of the week because he'd be out of contact for several days due to this emergency" Upon googling TP and e-note together, I discover that an e-note may be a primitive form of anonymous email service which may or may not ring a bell in the early developments of the world wide web. Upon reaching this sentence, I shrug and dismiss it as unimportant—knowing what TP may or may not be an acronym for—but later in the book, more inferences to the same abbreviation occurs. At first, I'm thinking teleprompter without knowing exactly what a teleprompter does.

More occurrences in equally lengthy paragraphs occur a few pages down the line. "He could see the piece of appropriation art in the mirror above the TP. He lowered the volume all the way and pointed the remote device at the TP like some sort of weapon"</em> and "But he was unable to distract himself with the TP because he was unable to stay with any one entertainment cartridge for more than a few seconds." At this point, I'm thinking TP is a video game like x-box. Seeing as I don't do the video game thing, I don't have a clue as to which model: Atari, x-box, nintendo? "He was up and moving back out toward it before the first ring was completed, flooded with either excitement or relief, the TP's remote device still in his hand, but it was only a friend and colleague calling and when he heard the voice that was not the woman who had promised to bring what he'd committed the next several days to banishing from his life forever he was almost sick with disappointment, with a great deal of mistaken adrenaline now shining and ringing in his system, and he got off the line with the colleague to clear the line and keep it available for the woman so fast that he was sure his colleague perceived him as either angry with him or just plain rude." and "The disk drive and TP viewer were still on in his bedroom and he could see through the angle of the bedroom's doorway the lights from the high-definition screen blink and shift from one primary color to another in the dim room, and for a while he killed time casually by trying to imagine what entertaining scenes on the unwatched viewer the changing colors and intensities might signify.

So you see my predicament. This fellow has quite a lot invested in TP's, whatever they may be, and so it befuddles me to think it's rather important to figure out what it is, and yet, because this acronym appears to be the ravings of, though talented in the game of tennis, a recluse who reads a lot, loves to write, and knows his cannabis. I'm not sure if it's the marijuana talking or his eccentricities in home devices I haven't heard of yet.