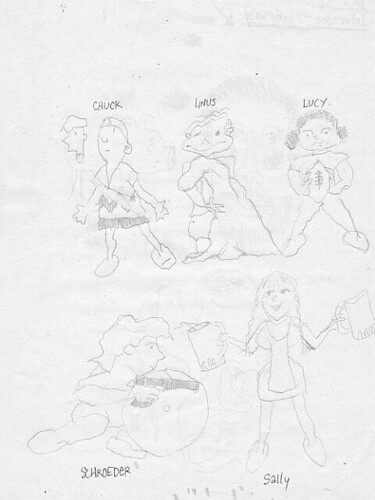 In my last post, I uploaded a some chicken scratch as I made an attempt to draw anything that came to mind in the style of Mike Luckovic. It's a painstaking process as I gradually become aware, the more the paper is filled with junk, that I just don't have it in me. And so, once I've given up the attempt. I flip the paper over and start to give it one last try. This time, however, I switch hands.

At this point I need to specify that I've always been right handed. First I draw a shape that looks to me like one of those trendy haircuts college students are getting. I fill in the face and I decide it sucks. It in fact reminds me of the style in which Ted Rall draws, so I'm not completely disatisfied with it. The shapes I draw next remind me of Charlie Brown's head, or at least what he might look like if he had any hair, so I fill in his body with no particular vision of what I'm after. He looks like an actor rehearsing the role of Hamlet, doesn't he?

I say to myself, "Shoot. If I can draw Charlie Brown with my left hand, let me try linus." And that's how I manage to reunite the peanuts gang. Although, I was after a sexy looking Sally and barely seemed to accomplish that with the beer mugs in her hands.

What does this mean? I spent loads of money for college trying to learn to draw good enough that I might be able to land a job in a communications marketing agency. That didn't pan out. My portfolio is empty. I can't bring myself to work on anything I can comprise a portfolio with, so I'm thinking I should sell it. If any art students are interested… It's never been used. I'll accept the SRV. Considering taxes make buying stuff so freaking depressing, it's a bargain.