Antichrist contains meaningful scenes, but to edit the explicit nudity for MPAA may be harmful too…

I thought ANTICHRIST would be vastly out rank PARANORMAL ACTIVITY. I was wrong. I had a lot more fun trying to bring myself to crawl into bed and close my eyes the night I saw PARANORMAL ACTIVITY than I did trying to figure out what the hell ANTICHRIST had to do with the ANTICHRIST. Could it be that this movie is one of those that one must watch over and over again to enable a decent amount of reflection, of research? And yet, when one places the two movies side by side, it is ANTICHRIST that would win the viewers attention. How's that work again? 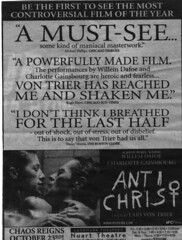 I was fortunate enough to catch this movie before it may be silently put out to pasture, for I don't expect that the same version will ever find it's way to local theaters around the country. Maybe I am being old fashioned, but as much as I appreciate art for art's sake, the story seems to take out the element of surprise in the equation. What I mean is, it's one thing to stand behind a film most people will interpret as soft porn. It's another thing to explain how a film called ANTICHRIST is something to consider true to life. I did not understand ANTICHRIST as much as audiences sitting thru The Da Vinci code exclaimed to their dates how lost they felt in trying to follow the plot.

This brings me to another question. Who was the audience this film was design to focus to? The spinster woman, the crooked politician, wikipedia? A woman loses herself in grief. Her spouse attempts everything to comfort her. Although her spouse is also grieving, he temporarily blocks reality out so that he can focus on one thing: to guide her back to her senses. What he doesn't know, and this may be somewhat of a spoiler so I'll try to word it as general as possible, is that "she" quit writing not because she was a devoted mother, but because she spooked herself with her own subject for a thesis.

I did relate to one scene. It was the forest scene where "he" finds himself in full view of a doe. The scene just stretches in awkward silence as if to await the sudden explosion of a deer rapidly sprinting in the opposite direction. I can recall one incident in my life when I had been hiking thru the trails of Descanso Gardens and I happened to spot a deer thru the branches and leaves of the surrounding foliage. I felt that moment of anxiety in which any second there would be rustle of leaves disturbing the quiet as the deer became spooked at my presence, but also in that time of silence I felt something else. It was the feeling of being watched. It was as if, though my eyes were focused on the deer, and the deer's eyes were also watching me, I couldn't bring myself to look away from the deer even though I felt that I might've been intruding in a part of forest where anything could turn up, namely a mountain lion or a rattle snake.

I'm sure this film has many metaphors that I don't know about. There are references made to astrology, torture, mysticism and sexuality. Without the sexuality, all the metaphors would cease to have relevance.