So, I find myself browsing the flickr account of somebody named coop666 and I find a picture of Coles, which is not really too far from my house. It's a stretch to walk, but doable. Anyway, the concert from the other nite had me wondering if the reason I thought Tracy Ullman was seated in the chair next to me could be because I paid for such great seats. Now, normal women who aren't in show biz would not bother making small talk to a complete stranger at a concert, at least not in such a polite manner as the gal I shall refer to as Mimi, so when she tries to make a toast, she grabs an empty cup from the ground and fills it with some of her beer for me to drink.* That's funny, but I think what's funnier was that I could not for the life of me remember who the hell this woman reminded me of and the following day, I'm searching and searching the Internet for 'British comediennes' and I even specify 'female comedians' and/or 'feminists', but nowhere did I see Tracy Ullman as part of the results. It wasn't until later in the day that her name finally struck me by some coincidence, and I still can't fathom how or why Tracy wasn't part of the huge lists of comedy performers from the UK that I found. I began to wonder what it must feel like to be blacklisted, if that be the case, as I'm sure Tracy Ullman has made her fair share of enemies. And that's why I'm posting this picture of somebody I think looks a lot like Joaquin Phoenix just hanging out in downtown with some buddies.

That guy next to him also looks familiar, but like Tracy Ullman, I can't place him at the moment. He reminds me of someone from the boingboing.net clan, but I can only think of the name Cory Doctorow Joel Johnson and this guy standing next to Joaquin doesn't resemble Cory so much. Here's another picture of Joaquin that I found online from his appearance on the David Letterman Show. 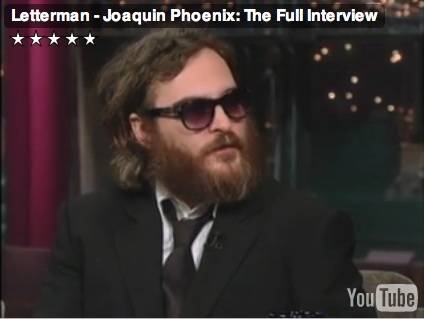 See what I mean? This guy, and the guy at Coles, look like brothers. The picture was taken at night, so that makes me wonder whether the glasses are prescription, not shades like the one Joaquin wore on David Letterman. After all, I think people stopped wearing sunglasses at night after the 80's song by Bryan Adams dwindled away. Was it Bryan Adams who sang that song? Eh, who cares?

** You can see the actual video clip of the interview if you follow this link to the Huffington Post, and I urge you to pay close attention to the part where David begins to bring up a movie (or a clip) that he saw as he tries to joggle his memory while he wavers his hand just over the cup of water sitting on Dave's desk for Joaquin. It seems as if Joaquin makes some effort to play on this harrowing move of Dave which emulates a hand sprinkling a mickey of some sort into the cup and Joaquin, famished for a buzz, gulping down the concoction.
Tags: film crews, lifestyle
Subscribe to Telegram channel blanketsin.com
Subscribe