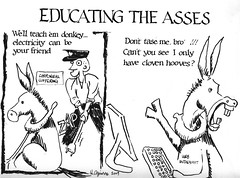 This lazy donkey sitting on his rump reminds me of the peanut's gang Schroeder. I originally wanted to draw a sybolic democratic donkey, but I couldn't figure a way to convey the idea that the Internet is probably the greatest invention since the automobile. Take a few steps back and tell me that people everywhere aren't developing a whole new attachment to electricity because of it. Isn't it enough to abandon gasoline? I know I haven't seen the light of day sitting behind my desk and figuring this thing called blogging. I'm losing color in my skin.

When I think of stepping outdoors, being paranoid, I can't help fear the worst. Well, the worse possible thing that could happen is that I'd be mugged and shot or knifed in the gut. But, if that doesn't happen and I decide to let myself go wild, then there's always a risk of being arrested. I can't begin to tell you how many times that's almost happened to me. An improvement on the taser stun gun caught my eye over at http://doc40.blogspot.com and it was this small entry that sparked the idea.

I guess I'm concerned about the Geneva Convention, although I don't know why. I've never served in the military, nor am in no way affected by it. It's doubtful Obama will call me to take part in his administration. I think all the positions are filled already. I've read and seen a lot of news segments on the new ways in which the military tortures its prisoners. Sleep deprivation, scare tactics, waterboarding. So, it dawned on me how insane it would be to fall victim to a stun gun, after a person might've spent so many years devoting him/herself to the betterment of computer technology know-how. It's because both units, computers and stun guns, utilize electricity that makes the whole thing a farce.