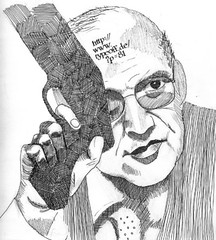 I'm feeling rather proud of myself, although it's not because I've just had sex. Ever since I read that born again christian comic strip about the anti-christ, I can't help not relating the devil's symbol (666) with sex sex sex. I'm funny that way.

No, I'm pround because my prehistoric laptop, a 500MHZ, 20 GB PowerBook, was slowly losing its capacity to recharge as the power chord was shorting out. But it was only the wiring running from the power adapter to the back of the laptop that was short circuiting. All I really did was the equivalent of splicing to wires together, keeping careful attention to the black wire and the white wire.

I guess I'm feeling special because I had to open the power adapter and unsolder the wires from the board. I then spliced a new, untarnished section of wire and soldered it back on. It was fun. And I saved money on a new power chord, which is good.

Above is a picture I drew. I couldn't think of anything to doodle at work so I googled pix of Cheney. I really wanted to draw a more cartoony character, but with that, I would've had to have come up with a scenario, preferably something witty. I couldn't think of anything, and besides, my cartooning skills aren't what they used to be. A couple days ago I wrote an entry in which I labeled my emotion icon as "naughty". It's the little kitty taking a dump, but when I first tried to create something original using Illustrator/PhotoShop, I jumped the gun to get something completed. And let me tell you, it was awful. I wanted the kitty's face to gradually blush, kind of the way a person's face might get red with all the blood rushing to their head when they find themselves constipated. That didn't work out and I quickly came up with a not so red in the face kitty.

What I want to do is something similar, but without Adobe Illustrator. That means animated panels on paper, by hand, the way cartoonists did things in the old days. I just wasn't able to make the kitty seem like it was finished pooping and get up and exit. I'm not an Illustrator wizard, but I think I can get something better done on paper and scan it into the computer and go from there. That's my next objective to procrastinate. Maybe It will be enough to clean off my cluttered drafting table.