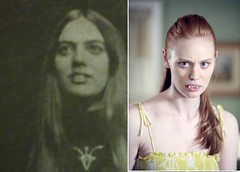 A book review in the LA Weekly this week shows a picture of a guy that looks either like Christopher Walken disguised as Johnny Depp, and another portrait photo of Sister Julia, a follower of what appears to be the Process Church. The book looks interesting. It's called Love sex fear death: the inside story of the process church of the final judgment, but I really only read the article because the picture of Sister Julia was puzzling me.

I know I had seen her face somewhere but I couldn't place it. Finally, it dawns on me, I don't know how, that the teen vampire from the HBO series True Blood is whom I am thinking of, and I sigh of relief is exhaled as I eliminate the possibility that she was in a dream, or I've unwittingly gotten myself involved into some satanic cult. I read the article again.

The most intriguing passage in this book review follows.

De Grimston was forced out by Mary Ann in 1974, and after unsuccessfully trying to start a Process revival, gave up and got a real job. Mary Ann kept revising and renaming the group, gradually removing all references to Satan and Lucifer before realizing that it was easier to persuade the rubes to part with their hard-earned jack for the protection of poor little defenseless animals than to facilitate the immanentization of the eschaton. Ultra-ironically, Wyllie recounts a rumor that her death in 2005 was the result of an attack by feral dogs that had broken out of their "sanctuary." Who says Jehovah doesn't have a sense of humor?