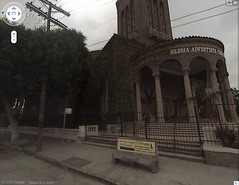 trange headlines in this weeks Newsweek magazine had me fumbling thru the text for insight. It had something to do with Jim Jones being a US security or defense advisor to Prez Obama. It was a weird headline, however, because it looked like this

Has Jim Jones lost his clout?
I did a search on-line to read the same story, but I wasn't able to pull it up; instead, I found this 2006 article.

❝… Jonestown Massacre still remains the most chilling example of faith turned against the faithful. The group was led by the charismatic Jim Jones, who started his church, the Peoples Temple, in Indiana. He then moved the group to the San Francisco area, and ultimately to a desolate area of Guyana❞

The picture above is a church here in Los Angeles. I don't think it is one that my parents ever took us to mass, but it does stick out when you pass it along the street. I rode the bus line that travels along this street for years when I would commute to USC for dental work on my crooked teeth, and this church was always a landmark I used to indicate how much further I needed to travel before requesting my stop. My mom had told me that it was the church belonging to the Jonestown massacre. I grew up believing that. I was probably too young to read about it in the newspapers when the trajedy occurred.

Don't you think it's weird that Obama has somebody handling national security going by the name of a religious leader who killed his followers? If anything, Newsweek is saying something too when they print a headline with the name in bright blood red. The corner of Alvarado and Hoover hold many memories for me. It was one block before the stop to my girlfriend's house who lived across the street from a cemetery. Heh… I feel like I invented goth.

I can't help notice Newsweek's description of the Peoples Temple* as an organization getting it's start in Indiana and relocating to San Francisco. Wikipedia specifies that the headquarters had relocated to S.F., but there were many smaller congregation in California.