I couldn't think of anywhere to go 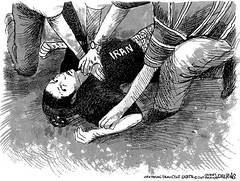 76534329@N00 ℈-"neda"
(Thumbnail)▏▎▍▌▋▊▉
… and because there's been so much commotion about Michael Jackson, who happened to live in Encino, I decided not to ride up there as I'm still learning how to maneuver a 500 pound bike. Instead, I looked up the movie The stoning of Soraya M. and made my way to a Laemmle's Playhouse in Pasadena.

So far, this movie season's most memorable flicks have been Hangover and The taking of Pelham 123, but there is something about middle eastern women, the way they wave a chador over their head, giving them a characteristic not unlike that of a dancing girl. Of course, one would have to have a vivid imagination, but that's always been something I've never lacked. Sexiness and a deep throat voice is all it takes to turn me on, sometimes, but in the movie The stoning of Soraya M., the story structure is simplistic and traditionally formed. It begins in the present time where the plot is told by the main character, Zahra. The set up is simple, Zahra roams around a desert field in search of something. When she finds what she may or may not have been searching for, the story begins. Because what is obviously of great value to her isn't revealed to us as an audience until she meets a traveling journalist, Freidoune, played by James Caviezel (Passion of the Crhist), who suffers an overheated engine in his travels thru town, every new scene sequence becomes an obstacle to decipher. Overly anxious to reach the border before morning for some unknown reason, it is the journalist's encounter with Zhara that moves the story forward.

Considering we pretty much know already how the movie is going to end, it's his expertise that attracts Zahra to seek out his interest. Zahra's strange note, tossed thru a window of a café where he bides his time while his car is at the mechanics, in turn, sparks his journalistic curiosity. Compared to The hangover, this movie about Iranian culture seems to be making quite an impression. My immediate reaction over the youtube vid which blatantly shows a woman dying after being shot by law enforcement officers after the Iranian post-election results was to juxtapose this sad news with that of biblical passages describing the stoning of Mary Magdalene; or this movie that just made its debut in Encino, Pasadena, Santa Monica and elsewhere. I enjoyed The hangover. It’s one of the few movies that can make me laugh. I was, however, completely disappointed after sitting thru Year one. I should’ve known by just realizing that Year one was PG13 that I would not've enjoyed it. Having grown up with Welcome back, Kotter TV, I started out as a Travolta fan until I developed a loathsome view of dance music. I still like Grease, but If I had to choose between the action packed The taking of Pelham 123 and Stoning of Soraya M., I would have to say that James Caviezel should be recognized with yet another edgy flick. The theatre in which I saw The stoning of… in was nearly packed (with senior citizens mostly, during the matinee showings). I was handed a survey in which I responded positively to most questions. When asked if I would recommend this movie to friends, for some reason I said “no”. Go figure? I guess I'm satisfied by you knowing this movie appeals to my taste in entertainment. True blood was really fun to watch this week too.